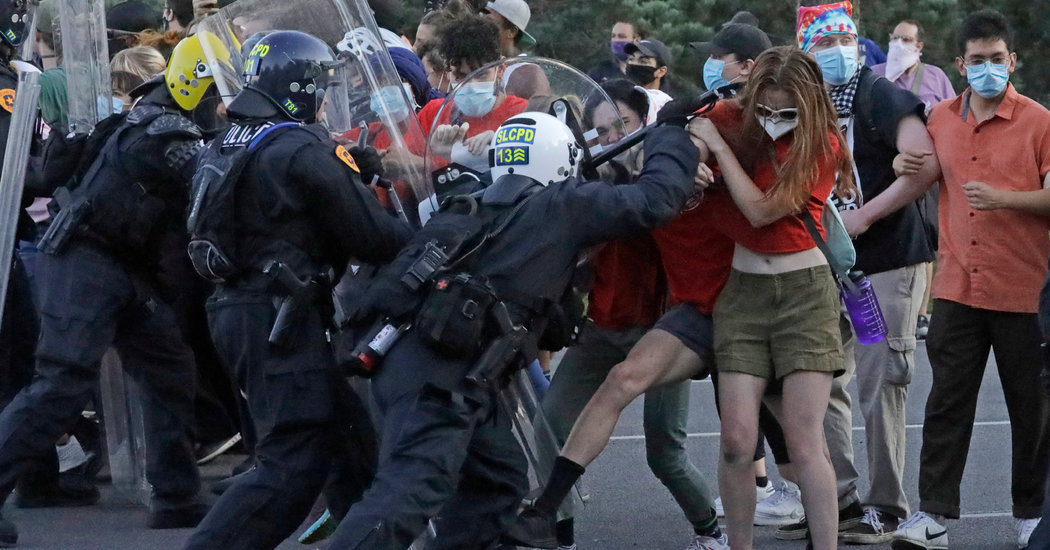 Gov. Gary Herbert of Utah declared a state of emergency Thursday in response to protests in Salt Lake City that erupted after the authorities said the fatal police shooting of a 22-year-old man in May was justified.

The Salt Lake County district attorney, Sim Gill, announced on Thursday that there would be no criminal charges against the two Salt Lake City Police Department officers who shot the man, Bernardo Palacios-Carbajal, on May 23.

After the announcement, protesters who had gathered for weeks in front of the district attorney’s office, part of the nationwide movement against police violence and racism, marched on 500 S, a major street in the downtown area. The police said that the protests disrupted traffic and broke windows, and that officers were sprayed with pepper spray. The officers tried several times to disperse the protests, the department said.

The Salt Lake Tribune reported that some demonstrators spilled red paint on the road in front of the district attorney’s office and that others threw bottles at police officers in riot gear. Officers pushed protesters to the ground and hit them with clubs, and a police car rammed into a protester’s vehicle that was being used as a barricade, the newspaper reported.

At least one officer was injured and at least two people were arrested, the police department said.

The governor’s order, in effect until midnight on July 13, closed the State Capitol building and its grounds to everyone except for employees and officers.

The district attorney’s announcement and the demonstrations came as the protests around the country, following the death of George Floyd in Minneapolis police custody in May, have called for funding cuts, policy changes and accountability for the police.

A lawyer for the family of Mr. Palacios-Carbajal said that Mr. Gill had chosen to perpetuate a “system of oppression” by not bringing charges, according to The Associated Press. “As a family, we will not stop in our pursuit of justice for Bernardo through all means that are available to us,” said the lawyer, Nathan S. Morris, reading from a statement prepared on behalf of the family, who had called for peaceful protest.

Mr. Morris could not immediately be reached for comment.

Mayor Erin Mendenhall of Salt Lake City said in a statement on Thursday that the district attorney’s report provided “significant evidence of the justifiable actions” of the officers, but that it was also likely to disappoint those who wanted the officers to face charges.

“I know that for some, today’s decision does not feel like justice,” she said in the statement. “It has become increasingly apparent in our city and across the nation that there is a difference between what so many feel is morally correct, and what is considered appropriate and justified under the law.”

Chief Mike Brown of the Salt Lake City Police Department welcomed the results of the investigation, saying it provided “transparency and accountability.”

In a report to Sheriff Rosie Rivera of Salt Lake County and to Chief Brown, Mr. Gill recounted the events on the night of the shooting based on a summary of the department’s Internal Affairs investigation.

On May 23, just after 2 a.m., Officer Neil Iversen and a partner responded to a 911 call by a person who reported that a Hispanic man had entered the caller’s hotel room and robbed the caller at gunpoint, the report said. Shortly afterward, another caller reported that two men had kicked in the door of their room at the same hotel during an armed robbery.

When they arrived at the hotel, the officers saw a man, later identified as Mr. Palacios-Carbajal, searching through bags he was holding. He was ordered to show his hands, but instead he fled, the report said.

By then a sergeant and another officer, Officer Kevin Fortuna, had arrived, it said. Officer Fortuna and Officer Iversen later told investigators that the man had rolled over on his back and raised his right arm with the gun in his hand, and that the two officers had fired at him until they believed he was “no longer a threat,” the report said.

The medical examiner’s report said he had been shot in his back and right side between 13 to 15 times, the investigators’ summary said.

The officers’ body cameras corroborated their statement that they had shouted “drop it” multiple times and that they believed Mr. Palacios-Carbajal could shoot at them at any time, the report said. The report said investigators had concluded the officers’ actions satisfied state law that “justifies use of deadly force.”