U.S. Says Most of China’s Claims in South China Sea Are Illegal 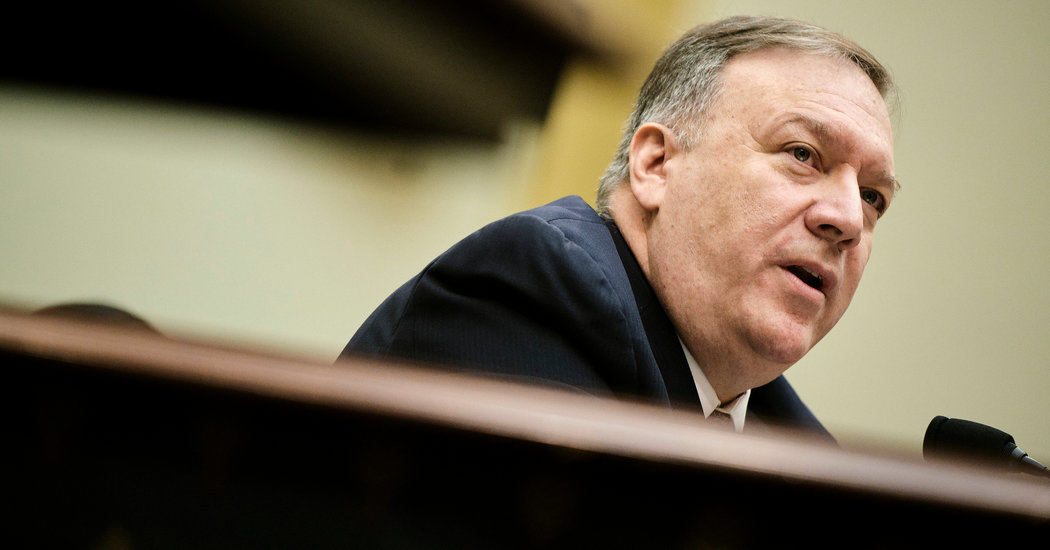 WASHINGTON — Secretary of State Mike Pompeo announced on Monday that China’s expansive maritime claims across most of the South China Sea were “completely unlawful,” setting up potential military confrontations with Beijing and sanctions against companies as the United States seeks to push back Chinese activity in the region.

Mr. Pompeo said China’s yearslong “campaign of bullying to control” offshore resources across much of the area was illegal. The announcement was the strongest and most explicit support by Washington of a ruling in 2016 by an international tribunal at The Hague that China had violated international law with its actions.

Mr. Pompeo’s announcement aligns U.S. policy directly with that ruling and puts Washington in a position to enforce the tribunal’s decision, even though China has rejected it. The statement is not explicit on U.S. military aid, but leaves open the possibility that the United States might come to the defense of nations like Vietnam, Malaysia and the Philippines if clashes erupt because of Chinese aggression. The United States has a mutual defense treaty with the Philippines.

“The statement is a full-throated endorsement of the tribunal’s ruling,” said M. Taylor Fravel, a political scientist at the Massachusetts Institute of Technology who studies China’s territorial disputes and its military.

But the United States is sticking to its policy of neutrality on competing claims to legitimate land features such as the Spratly Islands, he added.

China and five other governments have competing claims to land features in the South China Sea, and China has also come into conflict with Indonesia over Chinese activity in waters by that large archipelago nation. China delineates its claims to the South China Sea with what it calls “a nine-dashed line,” a boundary that encompasses an area the size of Mexico and demarcates almost the entire region.

The area has potentially rich oil and gas resources, and governments often sign contracts with companies that do exploration and drilling in the region. There are also abundant fisheries. Fishing boats and coast guard vessels from various nations have clashed repeatedly in recent years across the sea.

Mr. Pompeo said that “Beijing has failed to put forth a lawful, coherent maritime claim in the South China Sea,” and so the United States was rejecting any Chinese claim to waters beyond a 12-nautical mile territorial sea derived from land features or legitimate islands.

Some features that are tiny atolls and rocks built up by China are not legitimate land features and cannot be claimed by the country, Mr. Pompeo said. These include Mischief Reef and Second Thomas Shoal, which fall under the territorial jurisdiction of the Philippines, and James Shoal, which is 50 nautical miles from Malaysia.

The Philippines brought the case against China in The Hague, arguing that China had violated the 1982 United Nations Convention on the Law of the Sea, to which Beijing is a party.

The big question now is what the United States intends to do about the Chinese military presence in those areas and other parts of the vast sea claimed by Beijing.

Starting around 2014, China used sand dredging to expand tiny features that were covered by water during high tide into larger outcroppings, and then built air strips and military posts atop those. Mischief Reef is one of those sites. The Chinese military warns American military planes that pass close to the reef.

Since the Obama administration, the U.S. Navy has been conducting what it calls freedom-of-navigation operations across the South China Sea to challenge Chinese claims to the waters. But in recent months, the U.S. Navy has pushed back in other ways: In April, it sent two warships into waters near Malaysia as a show of force against a Chinese government ship that had been following a Malaysian state oil company ship doing exploratory drilling.

Mr. Pompeo’s announcement could mean more such operations by the Pentagon. Washington could also take other actions based on its new, more forceful position.

“Will it also sanction companies that do business with China in what are now, in the U.S.’s eyes, illegally occupied waters?” said Julian G. Ku, a professor of constitutional and international law at Hofstra University. “I think it probably should, but it hasn’t done so yet.”

In June, Kelly Craft, the U.S. ambassador to the United Nations, sent a letter to the U.N. secretary general that laid out Washington’s position on China’s “excessive maritime claims.” That was a precursor to Mr. Pompeo’s announcement, and it built on a legal opinion that the State Department had reached at the end of the Obama administration, after the ruling in The Hague.

“The State Department, I think, was just looking for ways that we can more forcefully act and speak out in support of the smaller claimants who are getting bullied by China,” said Bonnie S. Glaser, a senior director for Asia at the Center for Strategic and International Studies. “And I think that comes across loud and clear in the statements. It’s all about supporting the actions of countries to fish and explore energy in maritime spaces that China has claimed.”

Daniel Russel, the assistant secretary of state for East Asia and the Pacific in the second Obama term, said that the Obama administration had accepted the tribunal’s 2016 ruling as “final and binding,” and that Mr. Pompeo’s statement was more “chest-pounding and angry invective about China” than a change in policy.

The Trump administration has been selective in its endorsement of international rulings from The Hague. It warned last month that international investigators looking into charges of war crimes by Americans in Afghanistan would face economic penalties and travel restrictions.

Global Times, a nationalist Chinese newspaper, published an opinion essay on Monday saying that the U.S. “desires to stir up troubles” over the South China Sea and that “it takes advantage of regional countries’ claims to sow discord between these countries and China. It portrays a bully image of China.” While the essay was published before the State Department announcement, it seemed to anticipate U.S. action, saying that Washington “certainly wouldn’t miss something like the anniversary of 2016 arbitration.”

Maritime claims are just one of several areas where the Trump administration has been applying greater pressure on China in recent months.

Robert C. O’Brien, the national security adviser, will address others this week during a visit to Paris, including the security of new 5G networks that incorporate Chinese-made hardware. A White House official said he would meet with his counterparts from France, Britain, Germany and Italy.

Last month, Mr. O’Brien gave a speech in Arizona saying that China’s president, Xi Jinping, saw himself as a “successor” to the Soviet dictator Joseph Stalin and warned that China sought to take advantage of the coronavirus crisis “to displace the United States as the leading global power.”