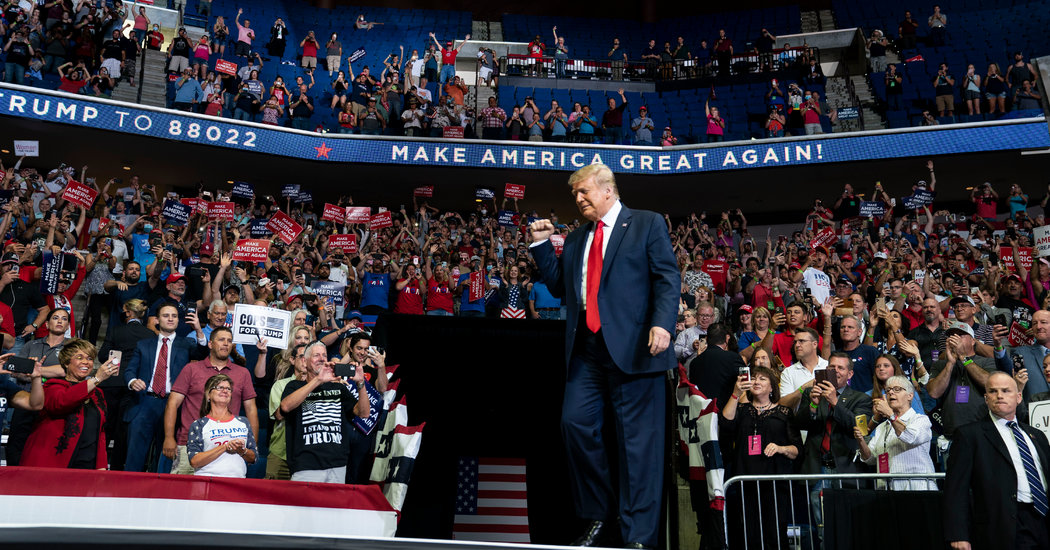 WASHINGTON — Amid ongoing concerns about President Trump attracting only small crowds at his re-election events, officials said Friday that his campaign was postponing a planned rally for the following evening in Portsmouth, N.H., citing safety concerns associated with an incoming tropical storm.

The rally was set for an outdoor space in an airport hangar, in the hopes that anxious supporters would be less frightened to attend an open-air gathering in the middle of a pandemic than they were in Tulsa, Okla., last month, when just 6,200 people showed up to fill a 19,000-seat indoor arena where Mr. Trump spoke.

Current weather forecasts for Portsmouth indicate that the rain is supposed to stop there around noon on Saturday; the rally was scheduled for 8 p.m.

Kayleigh McEnany, the White House press secretary, told reporters traveling with the president aboard Air Force One en route to Florida on Friday that the rally would be delayed by a week or two because of the “big storm.” Tim Murtaugh, the Trump campaign’s communications director, said the delay was due to “safety reasons because of Tropical Storm Fay,” and that a new date would be announced soon.

It was not clear whether the New Hampshire rally was on track to fill up. Aides were adamant they’d fill the venue. But people familiar with the sign-ups said the interest in the rally was significantly lower than for rallies that took place before the coronavirus paused campaigning.

Even before the storm warning, the state’s Republican governor, Chris Sununu, had said he would not be attending, citing safety concerns related to the coronavirus, and it wasn’t apparent how many other Republican elected officials were planning to come.

The postponement came as a spate of new polls show that Americans are being increasingly cautious about the coronavirus, as cases across the country, particularly in the South and West, have surged.

According to a recent Ipsos survey, about 76 percent of Americans said they were concerned about being infected by the virus, up from 69 percent in June. Before that, the trend had been declining since April.

The canceled rally marked the third time in less than a month that Mr. Trump’s re-election campaign has failed to relaunch as planned, as it attempts to restart rallies in the coronavirus era but faces anxiety about group gatherings from its own die-hard supporters.

After the debacle in Tulsa, where Brad Parscale, the campaign manager, had bragged about one million ticket requests only to be surprised by an arena that was more than half empty, the campaign has sought to temper expectations for its follow-up attempts at staging an old-fashioned Trump rally.

The campaign last month canceled a planned rally in Mobile, Ala., where the president was expected to campaign for Tommy Tuberville in his Senate runoff on Tuesday against Jeff Sessions.

As it planned for Portsmouth, there had been no bragging about requests for tickets. There was no showy construction of an overflow stage. Instead, campaign officials were conceding that they could be embarrassed a second time, if it turned out that Trump supporters were too anxious about gathering in a crowded public place to take in a speech they could alternatively watch on television.

The news out of Tulsa also did not make those supporters who were planning to stay home look overly cautious. Tulsa County reported 206 new confirmed cases of the coronavirus on Tuesday and 261 — a record high — on Monday, and Dr. Bruce Dart, the director of the Tulsa Health Department, said at a news conference that it was reasonable to link the spike to the rally and related events.