Trump, in Florida, Seeks to Quell Doubts About His Opposition to Maduro 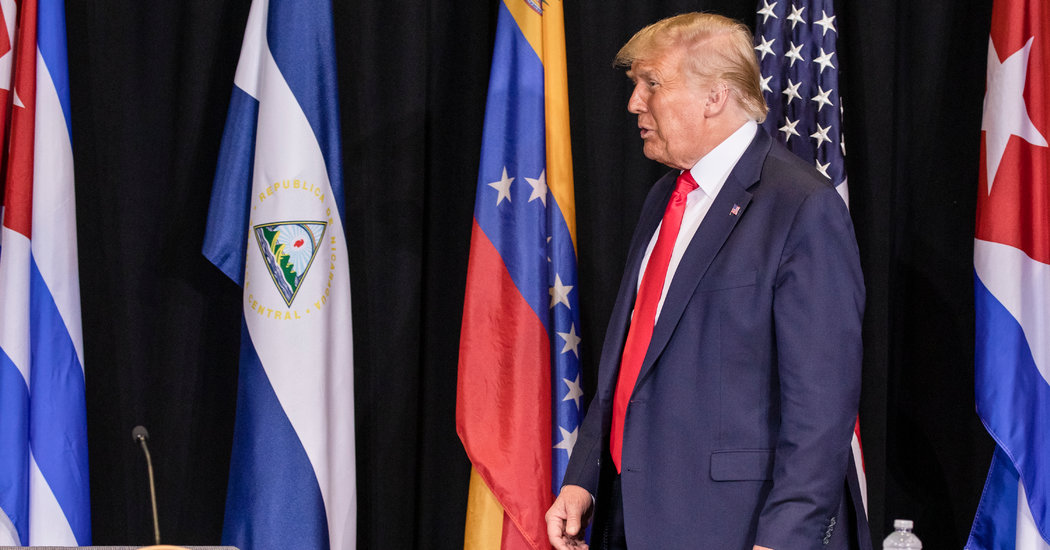 Speaking at a round table in Doral, Fla., with Venezuelan and Cuban political exiles, Mr. Trump reiterated his support for Venezuela’s opposition leader, Juan Guaidó, whose standing with Mr. Trump has grown uncertain in recent weeks, undermining the credibility of the United States’ longtime effort to oust Mr. Maduro, an anti-American strongman who has held power since 2013.

Political analysts in Florida said that Mr. Trump hoped that a tough message against socialist regimes in Latin America could shore up his faltering support among Latinos in the state, where recent polling has shown him trailing by more than five points.

Mr. Bolton writes that, after Mr. Guaidó and his allies failed in an attempted overthrow of Mr. Maduro in April 2019, Mr. Trump came to see the 36-year-old opposition leader as “weak” and Mr. Maduro as “strong,” and even referred to Mr. Guaidó as the “Beto O’Rourke of Venezuela,” a reference to the youthful Democratic presidential candidate whose 2020 campaign quickly fizzled.

Mr. Bolton also alleges that President Vladimir V. Putin of Russia, who has helped to prop up Mr. Maduro’s government with oil purchases, strategically undermined Mr. Guaidó with Mr. Trump by likening him to another Democratic presidential rival, Hillary Clinton.

Mr. Bolton even came to believe that Mr. Trump soured on Mr. Guaidó in part after noticing that the Venezuelan’s wife, on a visit to the White House, was not wearing a wedding ring. Mr. Trump and the White House have said Mr. Bolton, who resigned in disgust, is embittered and not credible.

But the president compounded the doubts in an interview in June with the website Axios in which he sounded notably lukewarm about Mr. Guaidó, whose popularity in Venezuela has slipped. Mr. Trump said that he “wasn’t necessarily in favor” of recognizing Mr. Maduro as the country’s leader and added, “I don’t think it was very meaningful one way or the other.”

The president also said that he was open to meeting with Mr. Maduro, with whom officials of his administration have said the only thing they will negotiate is a resignation.

The White House moved quickly to clean up those off-message comments, and Mr. Trump himself insisted on Twitter that he would “only meet with Maduro to discuss one thing: a peaceful exit from power.”

In scripted messages like Friday’s, Mr. Trump has expressed nothing but solid support for Mr. Guaidó. In February, Mr. Trump welcomed him to the White House and hosted him as a special guest at his State of the Union address, where Mr. Trump vowed that Mr. Maduro’s “grip on tyranny will be smashed and broken.”

That is the version of Mr. Trump’s views much preferred by both the White House and his campaign aides, who hope to rally Florida’s Hispanic voters with a tough anti-Maduro message, especially the roughly 700,000 Cuban-Americans in the Miami area who mostly oppose Cuba’s government and its close ally Mr. Maduro, who supplies oil to Havana. A much smaller number of the thousands of Venezuelans in Florida, 50,000 by some estimates, are eligible to vote.

Mr. Bolton also recounts that Mr. Trump repeatedly expressed interest in invading Venezuela, an idea he has hinted at publicly, though not recently. Mr. Bolton writes that, in August 2018, the White House chief of staff at the time, John F. Kelly, told him that Mr. Trump “says it would be ‘cool’ to invade Venezuela.”

Expanding his message to include new condemnations of Cuba, which the president denounces for its communist government and for its support of Mr. Maduro, Mr. Trump sought on Friday to depict Mr. Biden as sympathetic to their socialist policies and as a vehicle for the American left to carry them out in the United States.

“Joe Biden and the radical left are trying to impose the same system — socialism-plus — in America,” Mr. Trump said. “Biden is a puppet of Bernie Sanders, A.O.C. and the radical left,” he added, using an acronym for the liberal Democratic representative Alexandria Ocasio-Cortez of New York.

“History will record you as the president who freed this hemisphere from communism and socialism,” Representative Mario Diaz-Balart, Republican of Florida, told Mr. Trump at the round table.

Christian Ulvert, a Florida-based Democratic political consultant, said that Latinos in Florida, including Venezuelans and younger Cubans, had already been questioning the efficacy of Mr. Trump’s Venezuela policy. The president’s approach has revolved around what he called “historic sanctions” and pressure on the country’s revenue-generating oil exports — an approach undermined by Russian purchases of Venezuelan oil that have angered administration officials.

“Then John Bolton’s comments come out that clearly show that the president’s talk on Venezuela was all cheap rhetoric, and that he actually has no faith in Guaidó and was ridiculing him,” Mr. Ulvert said.

Mr. Trump’s aides also renewed a repeated attack he has made against Mr. Biden in recent months, based on a photograph showing the vice president and Mr. Maduro laughing together after the inauguration of President Dilma Rousseff in 2015 in Brasília. After the exchange, the Brazilian financial newspaper Valor reported that Mr. Biden had quipped: “If I had your hair, I’d be president of the United States.”

On Friday, a Trump campaign “question of the day for Joe Biden” email asked: “When given the chance, why didn’t you stand up to brutal Venezuelan dictator Nicolás Maduro and instead palled around with him and made a joke about his hair?” And speaking to reporters, the White House counselor Kellyanne Conway pressed the same point, adding, “I don’t find anything really funny about Nicolas Maduro.”

Mr. Biden responded in a statement, saying that “just like his response to this pandemic, the president has been unreliable and self-centered in his approach to the issues closest to the Venezuelan people.”

Juan S. Gonzalez, a former Obama White House national security aide who was present for the exchange, did not deny that Mr. Biden made the comment. But he said that Mr. Biden then confronted the Venezuelan, who had initially sought him out, on substantive issues including the release of political prisoners, economic reforms and engagement with the country’s political opposition. Mr. Gonzalez said the exchange lasted for “under a minute.”

He added that Mr. Trump’s pressure on Mr. Maduro appeared to be faltering, and said that signs of the president’s ambivalence toward Mr. Guaidó had played into the government’s hands and had made it easier to divide the country’s opposition.

Mr. Trump has spent much of his week on Hispanic and Latin American issues. He held chummy meetings at the White House on Wednesday with President Andrés Manuel López Obrador of Mexico, and attended a round table with Hispanic political leaders on Thursday.

“Trump’s strategy is not to win the Latino vote,” said Mr. Gonzalez, who advises Mr. Biden’s campaign, “but to take as much away from Biden as possible to win the election.” Mr. Trump carried 28 percent of the Latino vote against Mrs. Clinton in 2016.

Eduardo Gamarra, a professor at Florida International University, said he was helping to conduct a daily tracking poll that showed Mr. Trump with 55 percent support among Cuban-Americans, higher than among any other Latino group in the United States. But, he added, “Biden has nowhere the near the strength with Latinos that Clinton had in 2016.”