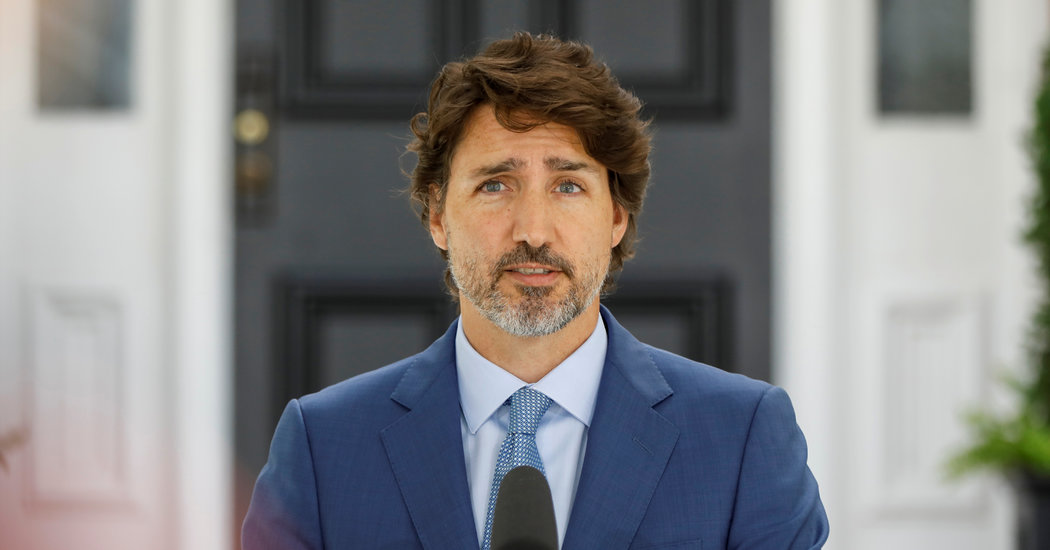 After digging in his heels for days, Prime Minister Justin Trudeau of Canada changed tack on Monday and apologized for taking part in a decision to award a no-bid government contract to a charity deeply connected to his family.

The apology came four days after it was revealed that the prime minister’s mother and brother had received more than $200,000 over four years to give speeches at events for the development organization, called the WE Charity, which had been awarded a government contract to oversee the disbursement of hundreds of millions of dollars of student grants.

“I made a mistake in not recusing myself immediately from the discussions given our family’s history, and I’m sincerely sorry about not having done that,” said Mr. Trudeau from outside his Ottawa home, during one of the briefings he has given regularly since the beginning of the coronavirus pandemic.

At Monday’s news conference, the virus took a back seat to a sustained grilling from reporters about the charity scandal.

The controversy began brewing earlier this month, when opposition politicians demanded an investigation into the government’s approval of the contract to the charity to distribute about $660 million in grants to student volunteers affected by the weakened economy.

The prime minister, who said Monday that the contract was selected by the country’s civil service, has spoken at many of WE Charity’s events, and his wife, Sophie Grégoire Trudeau, hosts a podcast connected to the charity.

Then, last Thursday, it was revealed the charity had paid Mr. Trudeau’s mother and brother a total of $207,000, about 282,000 Canadian dollars, for speaking engagements.

The country’s ethics commissioner has already launched an investigation into the affair, marking the third time the prime minister has been investigated for breaking conflict-of-interest rules since coming to power in 2015 on a promise of openness and transparency.

Both previous times, he was found in breach of the rules, which badly damaged his brand. His Liberal Party only narrowly won re-election last year.

“The question is, ‘Does the scandal go away, or does it continue?’” said Shachi Kurl, the executive director of the Angus Reid Institute, a Canadian nonprofit polling firm based in Vancouver. “A lot of that is out of his control. It’s down to what the opposition parties do.”

She noted that the prime minister’s approval rating, which has soared over the past four months because of his perceived deft handling of the coronavirus, had dropped to 50 percent according to data her firm released Monday.

So far, the scandal has not shown signs of abating, as revelations have arisen about other people in Mr. Trudeau’s inner circle with personal connections to the charity.

Finance Minister Bill Morneau, whose daughter works in the charity’s travel department, also apologized on Monday. “I did not recuse myself from the discussions on this topic and, given the fact that my daughter works for the organization in an unrelated branch, I now realize I should have in order to avoid any perception of conflict,” he said in a Twitter post.

Craig and Marc Kielburger, who founded the WE Charity together, took out a full-page ad in The Globe and Mail, a national newspaper, on Monday stating they “had made mistake that we sincerely regret” and that the last two weeks had led them to “more closely examine our own internal structures, governance and organization.”

The charity said it would waive all the administrative costs incurred in setting up the program and would return government funds already received. The charity had been slated to receive a total of $14 million for overseeing the program.

Mr. Trudeau has developed a reputation in Canada for delivering contrite apologies, both for historical government transgressions and for his own personal mistakes, including going to parties in blackface and brownface as a student and young teacher.

At Monday’s news conference, Mr. Trudeau said he was most sorry students would not get access as quickly to the aid program, established to award some students up to 5,000 Canadian dollars in grants for doing volunteer work. The government took over the program after the scandal surfaced.

With no election on the horizon, it’s unlikely the scandal will deeply damage Mr. Trudeau, said Lori Turnbull, director of the school of public administration at Dalhousie University in Halifax.

“It’s not a terribly damning apology. It’s quite clever. He’s not saying the decision was wrong, he’s saying he shouldn’t have been at the table for it,” she said. “I think this is very, very low risk for him.”