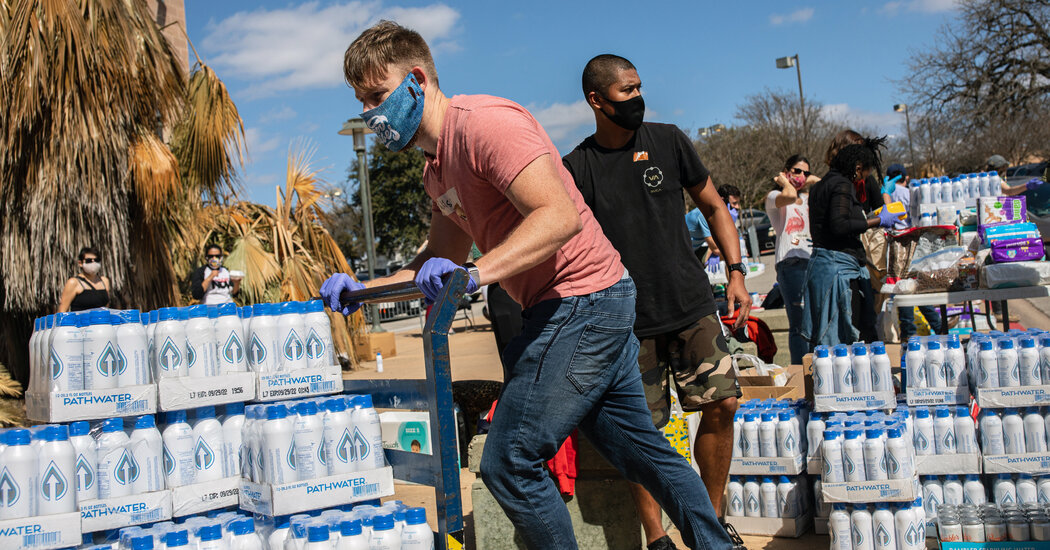 HOUSTON — Gov. Greg Abbott of Texas has called for an overhaul of the agency that oversees the flow of electricity through much of the state. Prosecutors have initiated criminal investigations into power outages that affected millions of Texans. And several lawmakers have called for the chairwoman of the Public Utility Commission of Texas to resign, as energy officials were summoned to Austin for marathon hearings on what went wrong during last week’s destructive winter storm.

Over the past week, Texas has been gripped by a volley of accusations and blame after the powerful storm nearly collapsed the state’s power grid, leaving millions in dark and unheated homes during some of the most frigid temperatures recorded in state history.

The indignation displayed by state officials mirrored the anger and anguish of residents, who continued to seethe over feeling stranded without power during the storm, burst pipes wrecking their homes and astonishingly high electric bills that have some contemplating draining retirement accounts to pay them.

“I want someone held accountable,” said Toni Anderson, whose husband, Carrol, died in his truck outside their home in 19-degree weather.

In the days after the storm blanketed much of the state with snow and ice, resignations have been offered and lawsuits have been filed. The future of the power grid has been listed as a top priority in the State Legislature, and political and energy industry analysts have said the political will exists to pursue at least modest changes to how the energy industry is managed.

But many questioned how far state officials would be willing to go, beyond interrogating and finger-pointing.

“We’re going to hear lots of cheap talk over the next few months,” said Mark P. Jones, a professor of political science at Rice University. “But I’d look for concrete legislation that would change the rules of the game.”

There have been calls for stronger oversight, and some have questioned the wisdom of the go-it-alone, regulation-resistant approach to energy that Texas has long embraced. Researchers said the outages, which came as the storm pushed the power grid to the brink of collapse, showed that the state did not have sufficient reserves and that facilities had not been bolstered enough to endure winter conditions.

“The colossal failure of our power grid was not an unpredictable event — it was the result of unsustainable and reckless neglect by leadership,” the political arm of Deeds Not Words, a progressive advocacy group for women, said in a statement.

Governor Abbott quickly homed in on the Electric Reliability Council of Texas, which oversees the power grid, when assigning blame. He said the council had “repeatedly assured” officials that it was prepared for winter weather. “Those assurances turned out to be false,” he said.

The council, known as ERCOT, was also the subject of criticism over having a governing board with several members who did not live in Texas. Five of those board members, including the chairwoman, resigned this week.

“Many of you are angry,” Mr. Abbott said in a televised address on Wednesday. “You have every right to be. I’m angry, too. At a time when essential services were needed the most, the system broke. You deserve answers. You will get those answers.”

In some ways, the timing of the disaster was fortuitous, coming just as the State Legislature, which gathers every other year, started its session. This week, a line of officials from ERCOT, the Public Utility Commission of Texas, energy executives, power providers and others faced a barrage of questions over the outages.

“Who turned my power off?” Todd Hunter, a nine-term Republican lawmaker from Corpus Christi, asked of energy officials during a hearing this week.

“Gentlemen, we’ve got a lot of people watching,” he said, adding, “Here’s the question I think most people want to ask you.” His voice rose. “Who’s at fault? I want the public to know who screwed up,” Mr. Hunter said. “I want names and details.”

Many lawmakers were unabashed in their criticism. “This is the largest train wreck in the history of deregulated electricity,” Senator Brandon Creighton, a Republican, told Bill Magness, the chief executive and president of ERCOT.

Mr. Magness acknowledged the devastation caused by the power outages, but in his testimony, he said that, even with the benefit of hindsight, ERCOT would not have acted differently. He said the grid was barreling toward a collapse — it was four minutes, 37 seconds away, to be exact, as demand surged and supply plummeted. The consequences of that, he said, would have been even more devastating.

“Now it didn’t work for people’s lives, but it worked to preserve the integrity of the system,” Mr. Magness said of the decisions made by grid operators, adding that if the system had completely failed, “We’d still be talking about how we’d get the power on.”

Disaster is no stranger to Texas, where hurricanes pummel the Gulf Coast, powerful tornadoes scrape the panhandle and wildfires scorch ranch land in the Hill Country. Even winter storms delivering snow and ice are nothing new.

But the level of consternation the recent winter storm has stirred in Texas has reflected the scale of the devastation as it swept across much of the state.

In the days since, much of Texas has returned to the kind of winter that residents are familiar with. Snow and ice have melted. In Houston, the highs have been pushing 80 degrees. Yet the storm’s consequences remain in the piles of wood and drywall left in front of houses with burst pipes. They are seen in the eager trades for plumbing equipment on social media and, in one community, at a local bar, with such items impossible to find in stores.

Valerie Williams was spared damage to her home, but she and her family were confronting an electric bill of $8,100. She had been one of the customers using services like Griddy, where the cost of electricity is tied to the fluctuating wholesale price. She had written to Mr. Abbott and had gotten no response.

“I was just suggesting to the governor that we get some answers,” said Ms. Williams, who lives in Burleson, a Fort Worth suburb, saying that she was hoping for relief, as the storm presented a situation she never anticipated and left her wary of state leaders.

“Honestly, I feel like we’ve lost faith in the people responsible for making sure we have what we need to be healthy and safe in our own homes,” she said. “That’s the hard part. Never did I think in Texas we couldn’t have what we needed, and unfortunately that’s how it is.”

District attorneys across the state have said they had started inquiries to determine whether anyone — including state officials, agencies and power companies — could be held criminally responsible for any part of the storm’s aftermath.

“We will not forget the horror our community experienced,” José Garza, the district attorney for Travis County, which includes Austin, said in a statement. “We will do everything we can to hold powerful actors, whose action or inaction may have led to this suffering, accountable.”

Lawyers also expect an avalanche of lawsuits that will rival the litigation that always comes after major hurricanes. “I think you’re going to see more litigation from this event, certainly more than Harvey and even more than Ike,” said Tony Buzbee, a lawyer in Houston.

For Ms. Anderson, the storm has not passed.

In her kitchen in Crosby, just outside of Houston, the drywall was soggy and the floors had buckled from the deluge that came from a burst pipe in the attic. Still, that was nothing compared to the gaping absence of her husband, who most likely went to his truck for a spare oxygen tank. His main tank ran on electricity, and the power had gone out the night before.

Ms. Anderson has filed a lawsuit against CenterPoint Energy, her power provider, arguing that outages that the company had described as rotating instead lasted for hours, leading to her husband’s decline. (CenterPoint said the company does not comment on litigation.)

Mr. Anderson had tried to plug in a vacuum into a generator to clean up the mess made by the burst pipe. He became exhausted and struggled to breathe. While he went outside for the spare oxygen tank, his wife continued mopping. She later found him slumped over his truck’s console.

Mr. Anderson, 75, was a Vietnam veteran who had kept the same job for decades with the Port Terminal Railroad Association. He could be a bit gruff, Ms. Anderson said. But when she called his old co-workers from the railroad, they told her stories of his kindness, how he had helped them out on the job.

‘Tell Us if He’s Dead’: Abductions and Torture Rattle Uganda

‘Everything Is Worth Freedom’: Uganda’s Opposition Leader Faces the Future

Indigenous Party, Not on the Ballot, Is Still a Big Winner in Ecuador Election