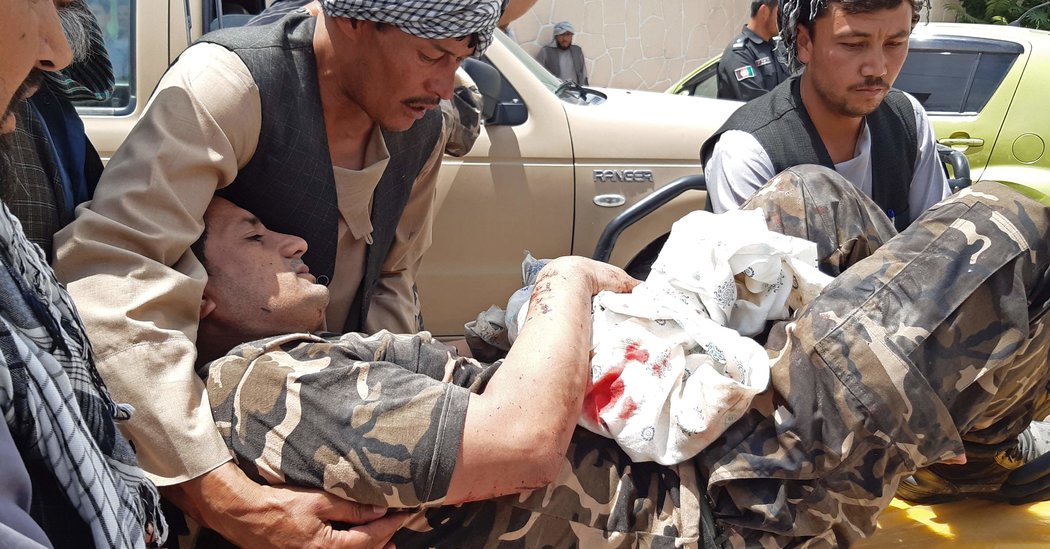 KABUL, Afghanistan — The Taliban waged a sustained assault against the Afghan intelligence complex in the city of Aybak on Monday, part of a bloody wave of violence across the country’s north.

With the opening of peace talks between the insurgency and the Afghan government stalled for months, the Taliban have intensified their offensives, creating one of the deadliest years of the long war.

On Monday, insurgents detonated a car bomb at the entrance of the Afghan intelligence agency’s office in Aybak, the provincial capital of Samangan Province, about 150 miles northwest of Kabul.

The blast opened the way for a squad of fighters to enter the compound, where hours later they were still battling the Afghan forces, said Raaz Mohammad Mowahid, the head of the provincial council in Samangan.

The exact number of casualties was not clear, but the provincial governor’s office said that at least 40 injured people were brought to the hospitals immediately after the initial explosion.

“Parts of the N.D.S. and the municipality buildings were destroyed by the explosion,” Mr. Mowahid said, referring to the National Directorate of Security.

Zabihullah Mujahid, a spokesman for the Taliban, confirmed that the insurgency was behind the attack.

A major attack inside a city seems to breach an understanding between the United States and the Taliban, who signed a preliminary peace deal in February that begun the withdrawal of American forces.

The deal, in which the Taliban guaranteed that they would not attack American targets, has faced criticism from Afghans, as it lacked any guarantee of a cease-fire with other Afghans. But American officials have said that they had an understanding with the Taliban that the insurgents would reduce their levels of violence by as much as 80 percent and not carry out attacks in major cities and population centers.

The February deal was expected to open the way within 10 days for the more complicated part of the peace process: talks with the Afghan government over a future power-sharing agreement. But those talks have been repeatedly delayed over complications with a prisoner swap that was laid out as a precondition for negotiations. The American deal with the Taliban called for the release of up to 5,000 Taliban prisoners in return for 1,000 Afghan security forces held by the insurgents — a clause that angered many Afghan officials.

After balking for weeks, the Afghan government began a phased release of Taliban prisoners, under heavy pressure from the Trump administration. But with more than 4,000 Taliban released, the last stretch is once again facing difficulty, as the Afghan government says it cannot release about 500 of those on the Taliban list because they are deemed dangerous and are accused of serious crimes.

Javid Faisal, a spokesman for Afghanistan’s National Security Council, said the government has proposed that the Taliban suggest new names instead of the 592 that cannot be released. It is unclear whether the insurgents have agreed to that.

“We have told them that we are ready to release alternative people,” Mr. Faisal said.

At least 20 members of the Afghan security forces were killed in overnight assaults in two districts of Kunduz Province. In Badakhshan Province, the Taliban attacked security posts in Arghanj Khwa district, killing at least seven from the security forces.