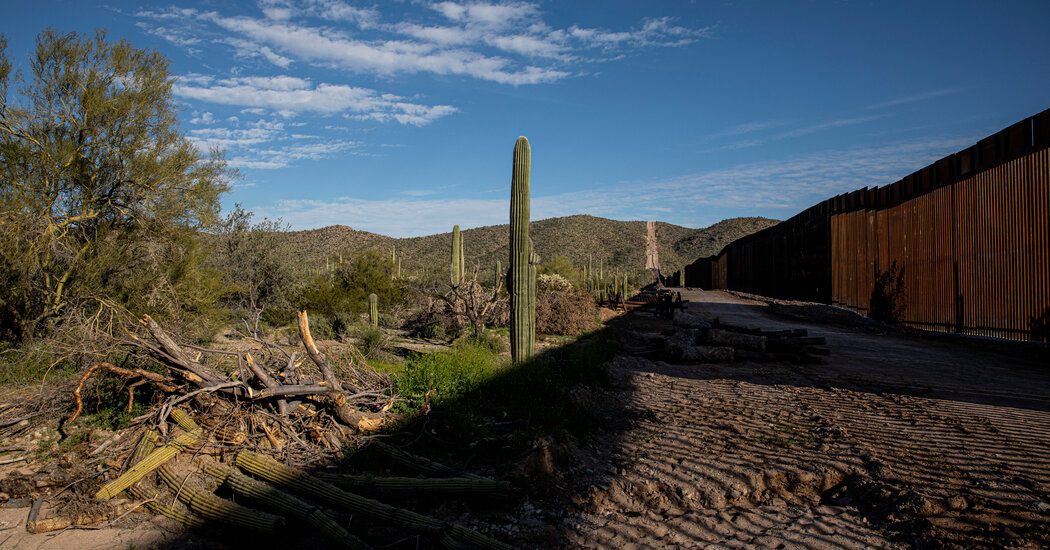 WASHINGTON — The Supreme Court on Friday rejected a request from environmental groups to stop construction of President Trump’s border wall while the administration seeks review of an appeals court loss.

The vote was 5 to 4, with the court’s more conservative members in the majority. Its brief order was unsigned and gave no reasons, which is typical when the court acts on emergency applications.

In dissent, Justice Stephen G. Breyer wrote that he feared that the court’s action effectively decided the case before the justices even considered whether to hear the administration’s appeal. Justices Ruth Bader Ginsburg, Sonia Sotomayor and Elena Kagan joined the dissent.

A year ago, by the same 5-to-4 vote, the court allowed the administration to start using $2.5 billion in Pentagon money to build the wall on the southwestern border while the case moved forward in the lower courts. In June, a divided three-judge panel of the United States Court of Appeals for the Ninth Circuit, in San Francisco, ruled against the administration, saying Congress had not authorized the spending.

On July 22, the Sierra Club and the Southern Border Communities Coalition, represented by the American Civil Liberties Union, asked the justices to lift their earlier stay. The alternative, the groups said, was to allow the administration to run out the litigation clock and complete construction in Arizona, California and New Mexico even in the face of an appeals court ruling that the work was unlawful.

The administration’s deadline for filing its appeal is 150 days from the appeals court’s judgment. As a practical matter, the environmental groups told the court, the disputed portions of the wall would be built before the administration had to file its petition seeking review, in late November.

“A stay should be just that: a stay,” the brief said. “Not a victory for the party that has lost before every court that has adjudicated the wall’s legality.”

In response, Jeffrey B. Wall, the acting solicitor general, said nothing of significance had changed since the Supreme Court issued its stay last year.

He added that the administration planned to file its petition by Aug. 7, far ahead of the deadline. That would allow the justices to consider whether to hear the case at their first private conference after their summer break, on Sept. 29.

In a second brief, the environmental groups said that the quicker timeline contemplated by the government was too slow and “still means that they will complete the very border wall construction in dispute before this court can hear argument on the case, much less render a decision.”

“Only by lifting the stay will the court ensure that it will have the opportunity to resolve plaintiffs’ claims on the merits before the wall is built,” the brief said.

The lawsuit arose from Mr. Trump’s efforts to make good on a campaign promise to build the barrier. In early 2019, he declared a national emergency along the Mexican border. The declaration followed a two-month impasse with Congress over funding to build the wall, a standoff that gave rise to the longest partial government shutdown in the nation’s history.

After Congress appropriated only a fraction of what Mr. Trump had sought, he announced that he would act unilaterally to spend billions more.

Soon after, the environmental groups sued to stop the president’s plan to use money meant for military programs to build barriers along the border in what he said was an effort to combat drug trafficking.

Judge Haywood S. Gilliam Jr., of the United States District Court for the Northern District of California, blocked the effort in a pair of decisions that said the statute the administration had relied on to justify the transfer did not authorize it.

“The case is not about whether the challenged border barrier construction plan is wise or unwise,” Judge Gilliam wrote. “It is not about whether the plan is the right or wrong policy response to existing conditions at the southern border of the United States. Instead, this case presents strictly legal questions regarding whether the proposed plan for funding border barrier construction exceeds the executive branch’s lawful authority.”

The Ninth Circuit affirmed Judge Gilliam’s injunction, saying that “the Constitution delegates exclusively to Congress the power of the purse.”

In their first brief, the environmental groups urged the Supreme Court to act before it was too late.

“Although some of plaintiffs’ injuries can be reversed by taking down the unlawful construction,” the brief said, “much of the damage defendants are inflicting on the borderlands will be beyond repair.”

In a statement after the court acted on Friday, Dror Ladin, a lawyer with the A.C.L.U., said “the fight continues.”

“We’ll be back before the Supreme Court soon to put a stop to Trump’s xenophobic border wall once and for all,” he said. “The administration has admitted that the wall can be taken down if we ultimately prevail, and we will hold them to their word and seek the removal of every mile of unlawful wall built.”

Miami Says It Can Adapt to Rising Seas. Not Everyone Is Convinced.

In Their Own Words: Why Experts Say Elementary Schools Should Open