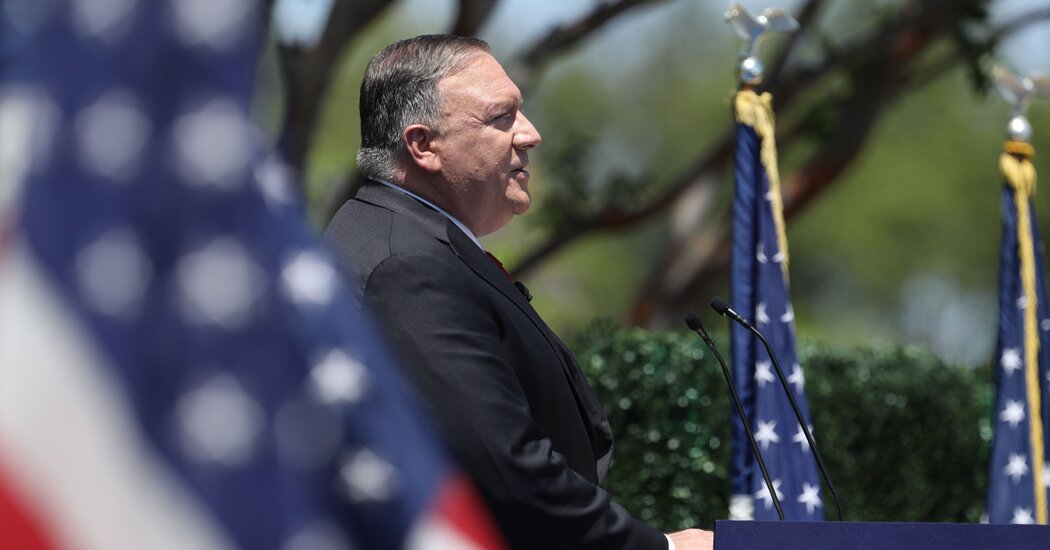 WASHINGTON — Senate Democrats unveiled a report Tuesday highly critical of Secretary of State Mike Pompeo’s management of the State Department, two days before he is set to testify on Capitol Hill.

The 46-page report, produced by Democratic staff members on the Senate Foreign Relations Committee, says Mr. Pompeo’s department is rife with what it describes as troubling issues: vacant key department posts, a culture of disrespect toward career staff members and an atmosphere of political retaliation.

Democrats say this has hampered the agency’s effectiveness in pursuing diplomatic relationships abroad or responding to crises like the coronavirus pandemic.

“President Trump and Secretary Pompeo have left the department decimated and demoralized,” said Senator Bob Menendez of New Jersey, the committee’s top Democrat. “This is not a bureaucratic or inside-the-Beltway issue. There are real consequences for the United States and our national security.”

The report most likely previews attacks that Democratic senators will make against Mr. Pompeo on Thursday, when he testifies before the committee on his department’s budget request for fiscal 2021.

It will be his first public appearance on Capitol Hill since coming under scrutiny for privately urging Mr. Trump to fire the State Department inspector general, Steve A. Linick, who was removed in May after opening investigations into Mr. Pompeo’s potential misuse of department resources and his effort to push arms sales to Saudi Arabia.

A State Department spokeswoman denied the report’s conclusions and said Mr. Pompeo had successfully enacted the foreign policy goals of the Trump administration, working to advance the interests of the United States around the world.

Senate Democrats said in the report that the White House and Mr. Pompeo had not nominated enough qualified candidates to key State Department posts, noting that 11 assistant secretary or under secretary positions are vacant or filled by acting officials.

“Vacancies and acting posts have had serious ramifications for America’s presence in the world, its overseas operations and for U.S. national security,” the report says. “The lack of senior department officials and personnel attrition levels doesn’t just mean empty desks. It translates to a lack of U.S. leadership on the global stage.”

Department officials have in turn blamed Democrats in the Senate for the vacancies, saying senators have not considered, and even obstructed, candidates for confirmation.

Democrats have countered by saying they have approved over 160 nominees for confirmation, but have denied some because some candidates put forward by the Trump administration misrepresented their qualifications or had a history of racist and offensive comments.

The report also analyzed data from a 2019 federal employee survey, which found that 53 percent of survey respondents in the department’s international organization bureau said political coercion in the agency was tolerated, up from 24 percent in 2016; while 34 percent in the agency’s legal bureau felt department leadership did not have high levels of honesty or integrity, an increase from 0 percent in 2016.

Senate Democrats also used the report to highlight a culture of fear and mistrust that career department staff members feel toward political appointees under the Trump administration.

They pointed to reports of a senior adviser in the department’s international organization bureau compiling “loyalty lists” after Mr. Pompeo became secretary, and highlighted a report from the agency’s inspector general that found Trump administration appointees in the bureau called some career employees “traitors,” part of the “Deep State” or “disloyal.”

Democrats also said career staff members were fearful after reports revealed that Mr. Pompeo urged Mr. Trump to fire Mr. Linick, saying that it “only reinforced the sense among career employees that wrongdoing by political appointees get a pass, but those who seek to reveal wrongdoing should watch their backs.”

The report includes 10 recommendations for how department officials can improve the retention of career diplomats, restore a nonpartisan culture in the agency and ensure qualified officials are properly vetted and nominated to key agency posts.

After the report’s release, a group of former department staff members who served in various positions throughout the Trump and Obama administrations signaled that the department needed significant reform and criticized Mr. Pompeo for reducing the agency’s diplomatic strength.

“This report is a powerful and important indictment of behaviors that undermine the State Department,” said Thomas A. Shannon Jr., a former under secretary of state for political affairs in the Trump administration. “The loser in all of this is the American people.”