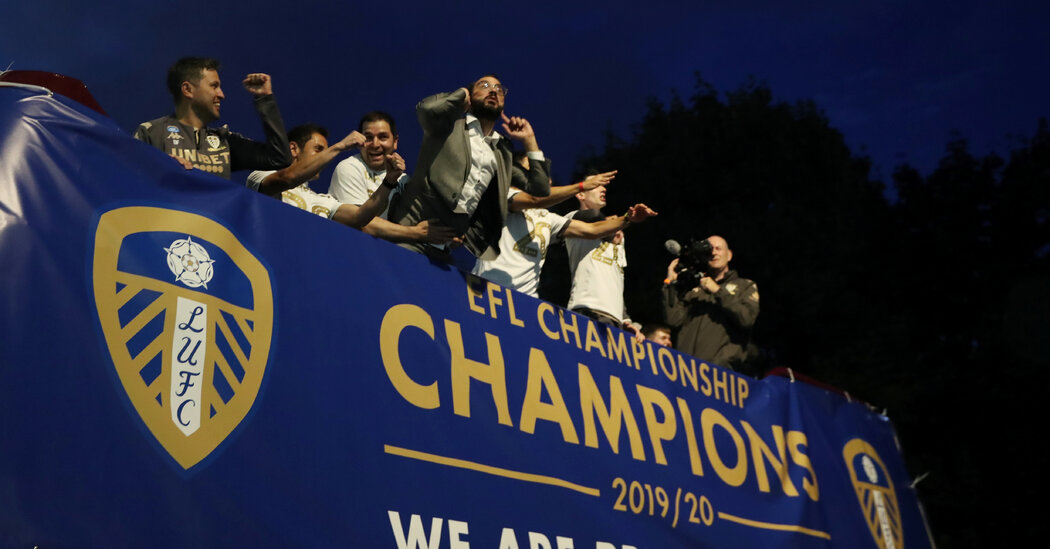 LONDON — It took the San Francisco 49ers seven years to turn their interest in owning a piece of an English soccer team into reality. Now, two years after buying a 10 percent stake in Leeds United, the 49ers’ owners are looking to increase their investment, and their involvement, in the storied club that two weeks ago won promotion to the Premier League.

Executives representing the 49ers and Leeds United’s majority owner, Andrea Radrizzani, are in talks about increasing the N.F.L. team’s share, according to Paraag Marathe, the 49ers executive who has sat on the soccer team’s board since San Francisco’s initial investment in 2018.

“It’s something that we are absolutely hoping to do,” Marathe said in a telephone interview.

Any new investment, though, would only further entrench American football team owners in the board rooms of England’s Premier League, the world’s most popular and lucrative domestic soccer competition. The Glazer family, which owns the Tampa Bay Buccaneers, has controlled Manchester United since 2005; Arsenal is backed by the Los Angeles Rams owner E. Stanley Kroenke; and Fulham, which is one win away from clinching a return to the Premier League, is owned by Shahid Khan, who also owns the Jacksonville Jaguars.

Under Radrizzani, an Italian sports media tycoon, Leeds United has long searched for new investment. Radrizzani has been in talks with Qatar’s sovereign wealth fund, which already owns the French superclub Paris St.-Germain, but those discussions — despite reaching an advanced stage last year — have so far failed to produce a sale.

While the 49ers only hold a minority share, they have hardly been passive investors in Leeds. Top executives, including Marathe and Jed York, the 49ers’ chief executive, had been regular visitors to Leeds’ Elland Road stadium until the coronavirus pandemic shut down global travel. Marathe said he and York had traveled to Leeds, a city in northern England, once every five to six weeks.

“It obviously had fallen on hard times under multiple ownership groups,” Marathe said of Leeds, a storied club that has been troubled by financial problems and on-field struggles since tumbling out of the Premier League in 2004. “But the brand equity is still there, the fans, and the amount of people that care about that club,” he said. “We just knew that not only do they belong in the Premier League, but if they got to the Premier League, that the sky’s the limit.”

The 49ers first took an interest in Leeds United in 2011 when Marathe, the president of 49ers Enterprises, the team’s venture capital division, was scouring the world for sports brands in which the team could invest. In Leeds, he found a team with a long history — a three-time English champion with a passionate fan base in a large city that had no other professional club — and started talks about a relationship. The 49ers did not invest then, but did sign a strategic partnership agreement that largely failed to yield any positive results, according to Marathe.

But the team’s interest in a more direct stake in Leeds remained. By 2015, Marathe had developed a friendship with Radrizzani, who two years later bought Leeds himself. “I said, ‘Wow,’” Marathe recalled saying to Radrizzani shortly after the Italian’s purchase was complete. “‘It’s such a coincidence because I actually love this club and I spent some time around this club.’”

Marathe and Radrizzani speak at least twice a week. And in addition to the regular trips to Leeds, the 49ers regularly share information about their business and processes; when Leeds was beginning the search for its current coach, the 49ers passed on a guide the team used to recruit its current general manager and head coach. Leeds eventually picked Marcelo Bielsa, the charismatic and quirky Argentine who led Leeds back to the Premier League.

The gap in quality — and resources — between the Premier League and the second-tier Championship that Leeds United just won can be significant. Last season’s Championship winner, Norwich City, will return there next season after finishing last in the Premier League this year. Some teams spend heavily to try to become competitive immediately. Others, like Sheffield United, which finished in the top half of the table in its first season back in the top flight, have prospered by relying on the fundamentals that took them there.

Marathe pointed to Sheffield United’s debut season as an example of an approach Leeds might be looking to follow.

“You don’t want to just rush and go high — ‘Every player out now; we’re a Premier League club’ — and buy this and this and this player,” Marathe said. “Sometimes you want to build it organically and thoughtfully.”

Marathe said that, for now, the 49ers remained focused on being patient with their investment — which became far more valuable on July 17, the day Leeds United’s top-flight return was confirmed — rather than on cashing in.

“This is more about continuing the journey than it is about what the multiple on our investment is,” Marathe said.