Northern Right Whales Are on the Brink, and Trump Could Be Their Last Hope 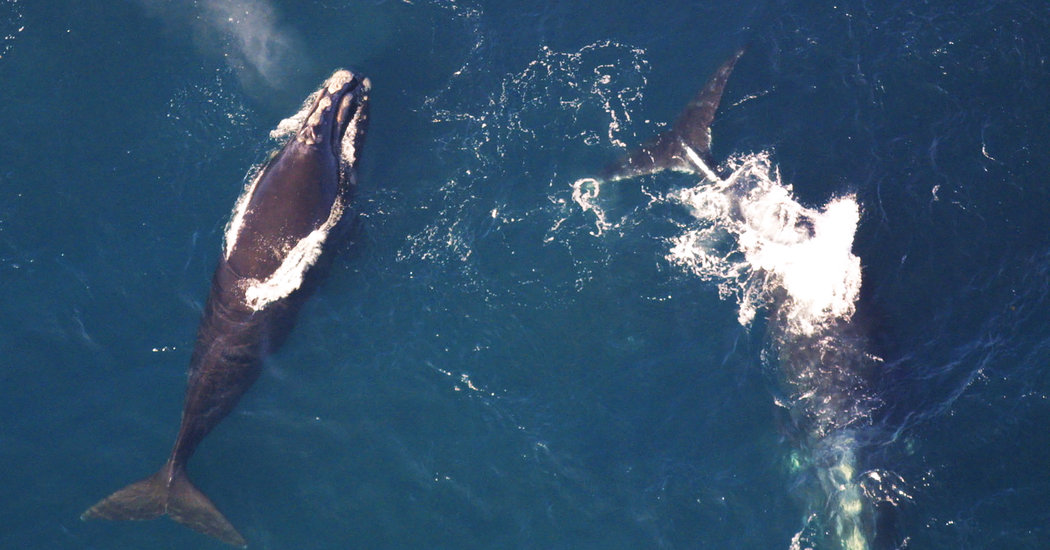 With only about 400 such whales left in the world, every individual is known to researchers and cataloged. At six months old, the calf had been struck several times on the head, suggesting one or possibly two vessel collisions.

On Thursday, such whales, which got their name because they float after being killed and thus were considered the “right whale” to hunt, will be placed on the Red List of critically endangered species by the International Union for Conservation of Nature, the last classification before they are gone from the wild. The task of responding will fall to an unlikely champion, President Trump, whose recent appeals for support from Maine lobstermen could clash with the task of saving the right whale.

Peter Corkeron, a senior scientist at the New England Aquarium who spent nearly a decade chronicling the gruesome deaths of right whales as the director of the National Oceanic and Atmospheric Association’s research program for large whales, said he feared the listing would have little impact.

“A lot of the dynamic was bad anyway, and under Trump it just got worse,” Dr. Corkeron said. “People are terrified to do anything about right whales at the moment,”

The right whales are dying at an alarming rate, from ship strikes and entanglement in lobster and fishing gear. NOAA’s fisheries division found that, to avoid extinction, the population cannot afford even a single death a year, but since 2017, 31 deaths have been reported. The calf found off Elberon was the 11th North Atlantic right whale known to have died since June 2019.

Plans to enact new federal rules are underway. Whale experts say they are insufficient, but even so, the proposed regulations have met with strong resistance from New England’s politically powerful lobster industry. Already hit hard by Covid-19 as well as Mr. Trump’s trade war with China, lobster industry leaders fear more regulations will imperil the livelihoods. They argue the problem lies more with large vessels and the government of Canada, in whose waters a majority of whales are dying.

“Lobstermen certainly recognize the dire circumstance that the right whale species is in right now,” said Patrice McCarron, executive director of the Maine Lobstermen’s Association. But, she said, “We’re in this awkward situation where right whales are not doing great, and it’s certainly not the fault of the commercial fisheries.”

About 20 of the 31 right whales found dead since 2017 were in Canadian waters, according to NOAA. At the same time, more whales were seriously injured by entanglements in the United States, mostly off the coast of Maine.

Mr. Trump in June declared himself the lobster industry’s savior by announcing fishermen would be eligible for bailout funds previously only given to farmers and ranchers. And earlier in June the Trump administration opened the Northeastern Canyons and Seamounts Marine National Monument, the Atlantic Ocean’s only fully protected marine sanctuary, to commercial fishing despite threats to the whales.

A major factor in the right whale’s fate is climate change. Rising global temperatures along with natural variation have caused the Gulf of Maine’s deep waters to warm nearly 9 degrees Fahrenheit since 2004, faster than 99 percent of the world’s oceans for much of this century.

That has significantly reduced supplies of the right whale’s primary food source, fat-rich zooplankton that thrive in cooler waters. Following the food, right whales that used to spend summers in the Bay of Fundy have been congregating farther north, in the Gulf of St. Lawrence, where commercial shipping and Canadian fishermen have proven deadly.

Climate change is also imperiling lobster fishing. By 2050, warming is expected to cut lobster populations in the Gulf of Maine by as much 62 percent, according to the Gulf of Maine Research Institute. But the Trump administration is reversing efforts to combat climate change, and is loath to impose new restrictions on the already embattled industry.

“Instead of acknowledging these risks and initiating dynamic management in these newly utilized areas, NOAA is entrenched in the old way of doing things, resulting in more right whale injury and mortality,” said Kyla Bennet, science policy director for the Public Employees for Environmental Responsibility, known as PEER, a group that defends the rights of civil servants.

Emails released to PEER under public record laws show the Trump administration also has tried to avoid bad publicity about entangled whales. When an adult female right whale, given the name Dragon by researchers, was spotted swimming near the surface with a buoy and rope stuck in her mouth in February, outside groups had to prod NOAA to tell the public about it.

The National Marine Fisheries Service, a division under NOAA, was “freaked out about any notion of NOAA putting this story in the news,” Tim Cole, a fisheries biologist with NOAA, wrote to a colleague. “But they’d be all over another calf sighting,” he added.

“Ah, I see. They only want to share the good news, not the bad,” Allison Henry, another federal biologist, replied. Two days later, the agency sent out a notice about Dragon.

PEER also filed a complaint last year with the inspector general of the Commerce Department, which oversees NOAA, arguing that federal officials intent on reopening fishing areas have been ignoring their own scientists on climate change as well as other threats to whales.

Such actions and lawsuits by conservation groups spurred on the new regulations, but they have pleased neither the lobster industry nor protectors of the right whale.

Under the regulations, lobstermen would most likely be required to use fewer and weaker lines from which whales could more easily break free.

Colleen Coogan, coordinator of NOAA’s Marine Mammal Take Reduction Team, said the aim was to reduce the serious injuries and mortality rate from entanglements by at least 60 percent. The ropes used by Maine lobstermen range from 1,500 pounds to well into the thousands, she said, but studies have found right whales can break out of rope 1,700 pounds or less. The hope is that by reducing the amount of vertical line in the water and mandating weaker ropes in buoy lines, right whales would have a fighting chance.

A draft proposed rule is currently under review and is expected out by the end of the summer, but it most likely will not be finalized until the end of the year or early 2021.

Ms. McCarron said Maine lobstermen should not have to bear the brunt of government solutions for saving the whale. “The federal government right now is not really asking anyone else to share the responsibility,” she said.

Sharon Young, the marine issues field director for the Humane Society, argued the proposal does not go far enough and that the line requirements cannot be enforced.

Saving the North Atlantic right whale, she and others argued, would require lobstermen to switch to ropeless traps, which are raised from the bottom with remotely operated lift buoys. Conservation groups say the technology is viable, but fishing groups say it would pose too heavy an economic burden.

Scientists noted that Canada recently issued wide-ranging protections, including new season-long fishing closures where whales congregate in the Gulf of St. Lawrence. The government also plans to conduct trials of ropeless fishing gear. If the United States does not take comparable steps, conservationists say, it is essentially allowing the species to go extinct.

“We’ve been failing them for decades,” Ms. Young said. Now, she added: “We’re going to say, ‘You’re life isn’t worth saving. It can be done, but we don’t like the economics of it. Sorry.’”

She’s an Authority on Earth’s Past. Now, Her Focus Is the Planet’s Future.