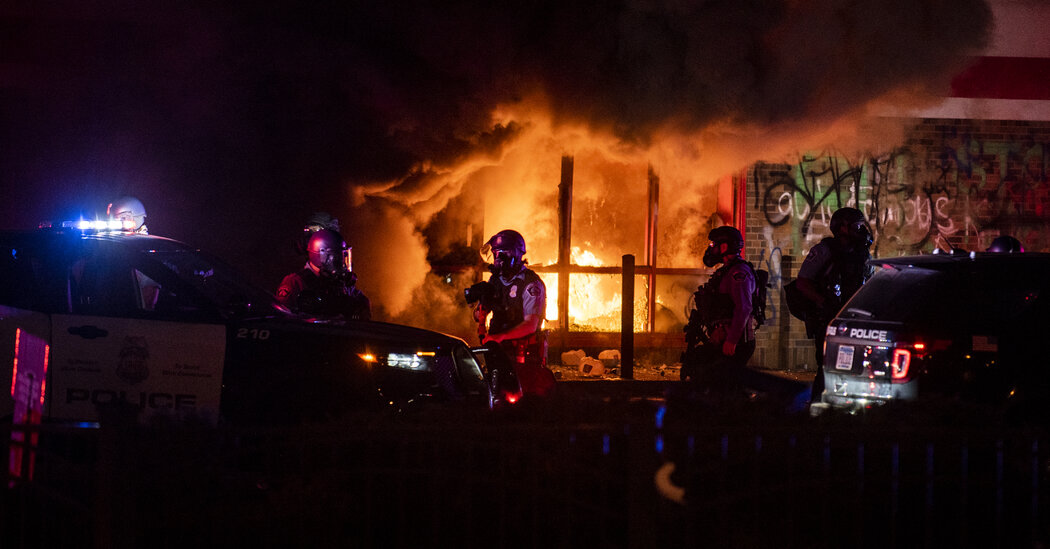 The tall man, dressed head to toe in black, including a black gas mask and a black umbrella, can be seen in a video wielding a sledgehammer as he calmly smashed the windows of a Minneapolis auto parts store.

The scene was one of the first widely shared images of wanton destruction to emerge from the protests in Minneapolis after George Floyd was killed by the police there. Yet the figure remained mysterious. He was given the nickname “Umbrella Man” and became the subject of online conspiracy theories.

The Minneapolis police unsuccessfully tried to identify the man based on a glimpse of facial features seen in the bystander video. But after receiving a tip about his identity, they used other photographs, including a driver’s license, to zero in on a suspect who they say has ties to the Hells Angels and a prison biker gang.

In a search warrant affidavit filed in Hennepin County District Court on Monday, the police requested cellphone records that would establish the suspect’s whereabouts on May 27, when the store was vandalized. They have not charged anyone with a crime.

Erika Christensen, an arson investigator with the Minneapolis police, wrote in the affidavit that the vandalism “created an atmosphere of hostility and tension” two days after Mr. Floyd’s death. It unleashed a chain reaction of arson and looting in the Twin Cities, she wrote, after protests had been relatively peaceful.

“In a short time after the front windows are broken out in The AutoZone, looting started,” the affidavit said, noting that the AutoZone store burned down later that day. “This was the first fire that set off a string of fires and looting throughout the precinct and the rest of the city.”

The affidavit asserted that the suspect, 32, hoped to instigate racial unrest. In addition to smashing the windows, it said, he spray-painted a message on the doors that encouraged looting. The store was on the opposite corner from the city’s Third Precinct building, which protesters later burned after the police abandoned it.

The suspect “wanted to sow discord and racial unrest by breaking out the windows and writing what he did on the double red doors,” the affidavit said.

The man’s name and telephone number were listed in the affidavit, but a man who answered a call to that number said, “You have the wrong number,” asked to be sent a copy of the affidavit and then hung up. A lawyer who represented him in a previous case did not respond to a request for comment.

The suspect is a member of the Hells Angels and an associate of the Aryan Cowboys, a prison gang in Minnesota and Kentucky, the affidavit said. Neither group could be immediately reached.

The Trump administration has often sought to blame the vandalism that took place during nationwide protests on leftist agitators. Attorney General William P. Barr claimed that “in many places” the protests were led by “far-left extremists,” but there is no evidence that anti-fascists coordinated demonstrations.

In the aftermath of the unrest in Minneapolis, a cross-section of officials, activists, business owners and residents have suggested that some of the destruction resulted from a breakdown in governance. They say the mayor and other local leaders, many of them relatively new to their roles, failed to anticipate the intensity of the unrest or put together an effective plan to manage it.

A previous accusation that the Umbrella Man was a member of the St. Paul Police Department became so widespread that the department issued a denial. It released a series of time-stamped surveillance videos showing that the officer was in St. Paul at the time of the episode.

The St. Paul police chief, Todd Axtell, issued a statement berating people on social media for spreading false information that could jeopardize an officer’s reputation and undermine trust in the police.