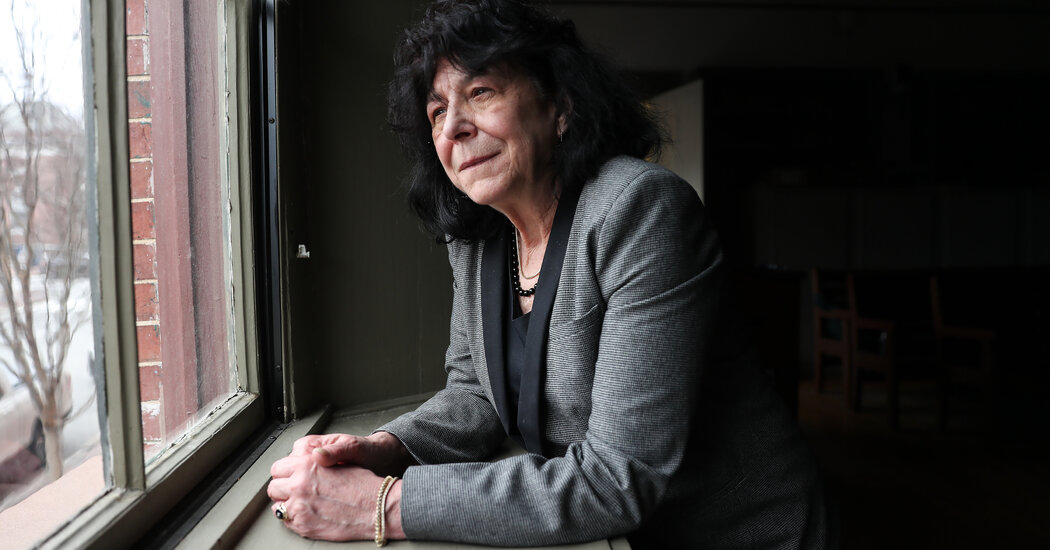 NEWBURYPORT, Mass. — Donna Holaday is the kind of mayor who does not say no to an invitation.

She shows up for lesser ribbon cuttings, at Radiant U Esthetics and the Angry Donut. She is there for the dinky parades, three or four blocks to the waterfront and back. Funerals, fund-raisers, National Honor Society inductions, she does them all.

Over four terms as mayor of Newburyport, a coastal city of around 17,000, she learned that she could always perk herself up by getting up on a podium, reflecting back the energy of a roomful of people. Not this past year.

“There is nothing. Nothing on my calendar. It’s just the way it has been for a year,” said Ms. Holaday, 66. Through the shutdown, she made a point of spending the day in her empty City Hall, if only so people could see the light on in her office.

But they were long days she described as “Whac-a-Mole, you take care of one thing and 15 things pop up.” And the calls she fielded were not about normal problems, like trash collection or snow removal, but matters of profound suffering: a loved one forced to die in solitude, or families running out of food.

“It was so traumatic, with people calling us crying, distressed,” said Ms. Holaday, who has announced she will not run for a fifth term. “I was sitting in my corner office feeling quite alone, there is no question about it.”

It has been an exhausting season for America’s mayors.

Mayors are hands-on officials in the best of times, barraged with criticism and individual pleas for help. Over the last year, they found themselves weighing matters of life or death — devastating local businesses by prolonging shutdowns, canceling gatherings treasured by voters, unable to provide comfort by being there in person.

And this spring, many American mayors are explaining their decision to leave office with the same reason: that the pandemic response demanded so much that they could not both campaign and perform their duties; or that the work had become so stressful that their families had recommended that they step away.

“They are just spent,” said Katharine Lusk, executive director of Boston University’s Initiative on Cities, which carries out an annual survey of mayors. Mayors surveyed last summer expressed deep anxiety about the effects of lost tax revenue on their budgets, as they juggled the pandemic, economic recovery and their core responsibilities.

Meanwhile, Ms. Lusk said, the positive aspects of the job were stripped away.

“They will tell you it’s the most personal job in politics,” she said. “If you can’t interact with the community, all of the things that sort of fuel mayors — the inputs that build up that reservoir of energy — that aspect of the job has been taken from them.”

There is little national data on local elections, so it is impossible to say whether this year’s turnover of mayors is unusual. In Massachusetts, nearly a fifth of the state’s mayors have announced they will not run again, as CommonWealth, a politics journal, reported, but that is not an unusual portion, according to the Massachusetts Municipal Association.

Decisions to step down are rarely made for one reason, and the year has increased pressure on leaders on many fronts, including conflicts over policing and racial justice. Among those who have offered an explanation, however, Covid fatigue comes up a lot. Michelle De La Isla, the mayor of Topeka, Kan., told The Topeka Capital-Journal that campaigning would make her workload unmanageable, and there “there was no way I was going to be able to do this at the same time” as heading coronavirus response.

Mayor Grover C. Robinson IV, of Pensacola, Fla., said he decided not to run out of frustration with the politicized reaction to health directives, after returning from a vacation and attending yet another contentious meeting. Similar explanations have come from the mayors of Highland, Ill., Pascagoula, Miss., and Seattle, among others.

Thomas M. McGee, the mayor of Lynn, Mass., a large, blue-collar city north of Boston, described parts of last year as “a blur,” as the virus raced through crowded neighborhoods that were home to multiple generations of families.

Lynn was classified as a high-risk zone for all but two weeks of the past year, and the sense of crisis has never abated, even now that the vaccination drive is underway.

“Do you remember the terrible earthquake and tsunami in Thailand? I feel like we’re running on the beach, up to a higher ground, and the tsunami is behind us,” he said. “Are we going to get to higher ground before the pandemic comes rushing back in and surges over us?”

Mr. McGee, a Democrat, ran for mayor of Lynn, his hometown, in 2016, after 22 years in the State Legislature. But nothing, he said, prepared him for the intensity of being a mayor last year.

“After 27 years and this, in some ways, lost year,” he said, “my family was like: ‘You’re stressed. It’s really had a substantial impact on you. And we’ll support you 100 percent whatever you want to do. But we think you should consider making a step back.’”

Mr. McGee’s account of the past year is laced with frustration at the federal government, which he said left local officials to cope with a fast-moving public health emergency, while former President Donald J. Trump contradicted basic messaging about safety.

“It became apparent, and I’d say it on calls, and while we were making decisions, ‘You know, we’re on our own here,’” he said. “They left a lot of us in the lurch, and we were left to really kind of navigate this on our own.”

His frustration was echoed by Joseph A. Curtatone, 54, the mayor of Somerville, Mass., a city of 81,000, who is leaving office after nearly 18 years, amid speculation that he will run for governor.

Mayors, Mr. Curtatone said, were forced to coordinate policies on such grave matters as shutdowns and school closings among themselves, putting collective pressure on the state government to follow their lead.

Nearly two-thirds of big-city mayors are Democrats, many in Republican-controlled states whose leaders were more skeptical of shutdowns and mask mandates.

That tension has exacerbated mayors’ “sense of being embattled,” even as coronavirus case numbers decline, said Ms. Lusk, of Boston University’s Initiative on Cities.

Thomas Bernard, the mayor of North Adams, a city of about 14,000 in the northwest corner of Massachusetts, said he desperately missed ordinary interactions, like reading picture books to schoolchildren.

He recalled the holiday season as a difficult time, as he was forced to make decisions that, as he put it, “really strike at the spirit of the community.”

“I was the person who stole fun from North Adams for a year,” he said. “It feels that way sometimes. I was making the decisions, like other mayors, that led to the cancellation of the things we all love.”

He announced in February that he would not run for re-election — the second time in nearly 40 years that an incumbent mayor will not appear on the ballot — so that he could focus on containing the virus and rebuilding the economy.

“I feel behind the curve on the recovery, and adding the campaign, it didn’t feel tenable,” he said. “It didn’t feel like I could bring the best of myself to all three of those things.”

Mr. Bernard, who recently turned 50, is unsure what he will do after he steps down.

“There will be days, as it gets more toward election season, and I’m not doing a spaghetti dinner, you know, I’m probably going to have a twinge,” he said. “There are going to be days — the last holiday tree-lighting as mayor, the last high school graduation — those are the moments I’m going to feel most emotional about.”