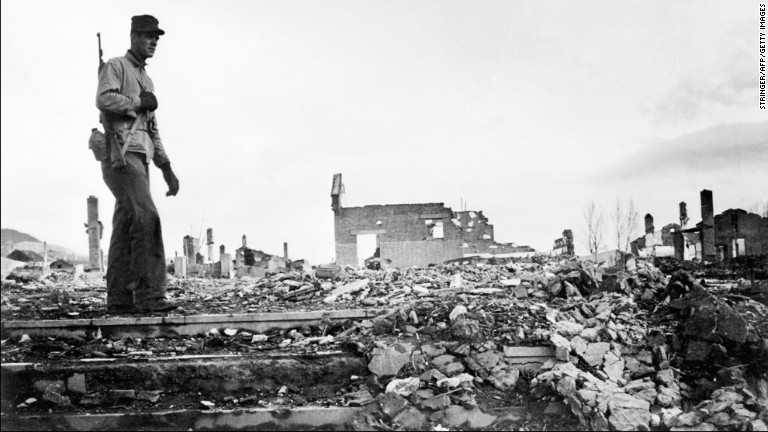 Here’s a look at the Korean War. Although hostilities ceased in 1953, there has been no formal end to the war.

Causes of the Korean War

Under Japanese rule before and during World War II, Korea was divided into two parts after the Japanese surrender. The Soviet Union occupied the area north of the 38th parallel and the United States occupied the area south until 1948.

The first war in which the United Nations played a role. When asked to send military aid to South Korea, 16 countries sent troops and 41 sent equipment or aid. China fought on the side of North Korea, and the Soviet Union sent them military equipment.

The United States sent about 90% of the troops that were sent to aid South Korea.

The first war with battles between jet aircraft.

The United States spent around $67 billion on the war.

The casualty toll had been reported as 54,246 until June 2000, when the Pentagon acknowledged that a clerical error had included deaths outside the Korean War theater in the total.

There are 7,600 American soldiers still unaccounted for from the Korean War as of April 2021.

There has never been a peace treaty, so technically, the Korean War has never ended.

Other Casualties by Country (killed and missing)

November 1947 – The United Nations General Assembly approves elections to be held throughout Korea to choose a provisional government for the entire county. The Soviet Union opposes this.

May 10, 1948 – The people of South Korea elect a national assembly, setting up the government of the Republic of Korea. The north refuses to take part.

June 25, 1950 – The UN Security Council denounces North Korea’s actions and calls for a cessation of hostilities and withdrawal of the NKPA to the 38th parallel.

July 1950 – In the first month of the war, US soldiers kill significant numbers of Korean civilians under a bridge, near a village called No Gun Ri. It is unclear whether the soldiers were ordered to kill civilians or acted on their own.

July 5, 1950 – For the first time since the end of World War II, US troops go into battle, at Osan, 30 miles south of Seoul. The first American casualty of the Korean War dies here, Private Kenneth Shadrick of West Virginia.

November 27, 1951 – Both sides agree the existing battle lines would be the final dividing line between North and South Korea if a truce is reached in 30 days.

April 26, 1953 – Truce talks are resumed, and the Communists agree to voluntary repatriation.

July 27, 1953 – Democratic People’s Republic of Korea, Chinese People’s Volunteers and the UN sign an armistice agreement. The Republic of Korea refuses to sign. However, hostilities cease within 12 hours. Terms of the armistice include creation of the demilitarized zone, the DMZ. Each side is 2,200 yards from a center point. The DMZ is patrolled by both sides at all times.

April 27, 2018 – During a day-long summit, South Korean President Moon Jae-in and North Korean leader Kim Jong Un pledge to formally end the Korean War, 65 years after hostilities ceased. Because of the involvement of the United Nations and countries such as the United States and China in the war, these nations will need to be signatories on an official peace treaty.