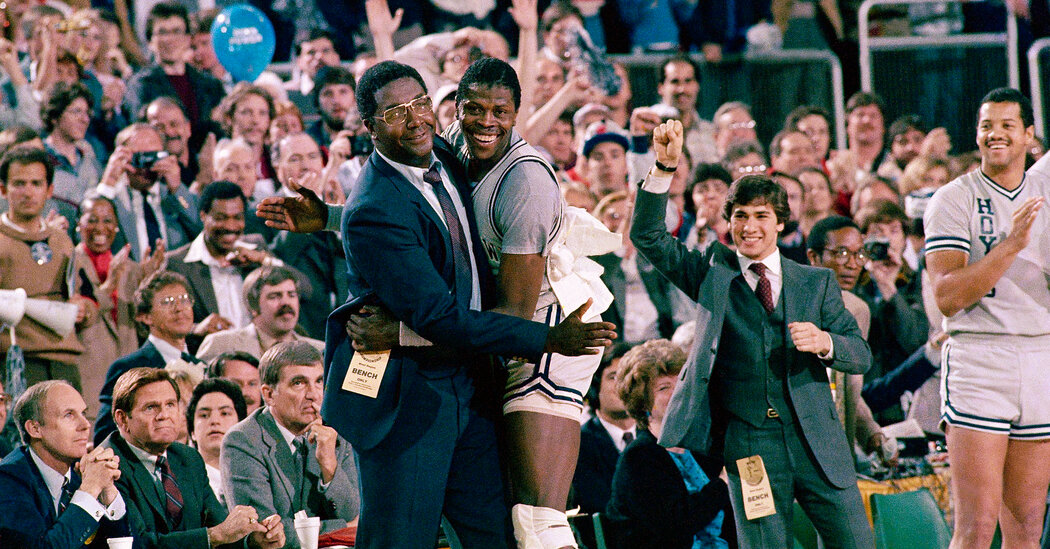 The story, as John Thompson Jr. often shared it, was that he was told by the Georgetown president, upon being hired to coach the university’s moribund men’s basketball program in the spring of 1972, that it would be great if he could win a few games. Maybe even qualify for a slice of postseason affirmation in the National Invitation Tournament.

Thompson, however, was already much less interested in invitations than he was in crashing the bigger tournament party along with the sport’s culturally protected borders. But why tip his hand? Why surrender so easily the specter of expectation to his employer and create an immediate narrative for falling short?

By his second season, the 3-23 team Thompson inherited was .500. By his third season, the Hoyas were in the N.C.A.A. tournament for the first time since 1943. A dozen years into Thompson’s Hall of Fame career, he became the first Black coach to win the Division I national title, in 1984.

Without much time to recruit for his first Georgetown squad, Thompson brought three players from the small Catholic high school team he was coaching in Washington and two others from that basketball-rich city. All were Black, immediately raising eyebrows and unearthing a measure of grapevine resentment at the mostly white Jesuit bastion of academia.

Thompson didn’t blink, or back down. Across that first decade and especially into the early 1980s — better known as the “Patrick Ewing Era” — he knew the program would run on his terms. Not surprisingly, the news media’s response, dubbing Thompson’s player protective methodology as “Hoya Paranoia,” was derisively swift.

Upon his death Monday at 78, and in the midst of what has become a long-overdue movement to confront America’s racial privations, it would seem appropriate to recast those kneejerk characterizations of Thompson’s relationship with the at-large college basketball community. Sure, the rhyme was catchy. But doesn’t the obsession with Thompson’s policies — and within a sport that once rationalized or celebrated the likes of Bob Knight — now sound more paranoid on the part of what then was an overwhelmingly white news media?

“A lot of things we did was attributed to paranoia, but it wasn’t,” Thompson said the last time we spoke, at halftime of a Georgetown game during the 2017-18 season — Ewing’s first as head coach. “It was the decisions we made as an educational institution. And in Patrick’s case, it was because of his talent and the demand being so much higher on him.”

In other words, the news media strategies were far from the random ravings of a man who, at 6-foot-10 and 300 pounds, was truly a tower of game-changing power, willing to do and say things that made people necessarily uncomfortable.

He was ahead of his time, speaking to a generation of young players and especially those who had a thought or two of possibly achieving the statistically improbable goal of being Black and coaching on a major college campus.

Tommy Amaker, for one. He was a teenage freshman point guard at Duke, out of northern Virginia and thus well-acquainted with the Hoyas on the 1984 spring night when Thompson, moments after vanquishing Houston in the N.C.A.A. final, was asked on national television how it felt to be the first Black coach to win it all.

“He made a statement that night I never forgot,” Amaker, now coaching at Harvard after stops at Seton Hall and Michigan, said in a telephone interview. “He said something like, ‘I take offense to that question because I may be the first to do it but I’m not the only one who has the ability or is willing to do the hard work. It’s about having the opportunity.’ ”

Amaker, whose 1998-99 Seton Hall team defeated Georgetown in Thompson’s final game, said, “For me, what he said after that game had great impact.”

Thompson wasn’t the ogre he too often was made out to be, even if he effectively played one on TV. That night we spoke, he was sitting courtside, near the Georgetown bench. “What do you want,” he barked. Then he pointed to the empty seat next to him and said, “If I wasn’t mean, you wouldn’t know it was me, would you?”

Who was John Thompson? Once upon a time, another kid who grew up poor in the nation’s capital and who made it out — via Providence College and the Boston Celtics — with the bounce of a ball. That, in effect, became his mission at Georgetown, unapologetically recruiting African-American talent, insisting he was no different than the hockey coach at Providence who exclusively mined Canada for players because that’s where the hungriest players were found.

In a 1980 Sports Illustrated article filled with allegations and insights about the double standards that existed for white and Black strivers in the college game and especially in the news media vernacular, he admitted, “I’m not a guru, I’m not an altruist, and I’m certainly no saint. What I am is a basketball coach.”

No evaluation would objectively doubt that he occasionally stretched the ethical boundaries, academic and otherwise, like the rest of the big-time sideline foot-stompers. Not every cause he championed — his boycott of a 1989 game in protest of a standardized testing rule he believed was racially biased, for one — was universally applauded.

Nor did he ever deny being a capitalist, on the Nike gravy train, preaching these inequities to his players so they might think about what the benefit of a Georgetown degree might do for them.

Whatever one thinks of the sport, the bottom line was that Thompson created something luminous and lasting at Georgetown from virtually nothing. And when he received his due, entering the Naismith Memorial Basketball Hall of Fame in 1999, with Ewing, Dikembe Mutombo and the Celtics patriarch Red Auerbach beside him onstage, it was Mutombo who stepped forward to place Thompson’s trademark game towel where it usually sat during a game.

On that of all nights, the chip that so many saw on his shoulder had to be covered. However big it actually was, it was hardly the essence of the man.

Tom Wilson Is Hockey’s Chief Villain. Or Is He?