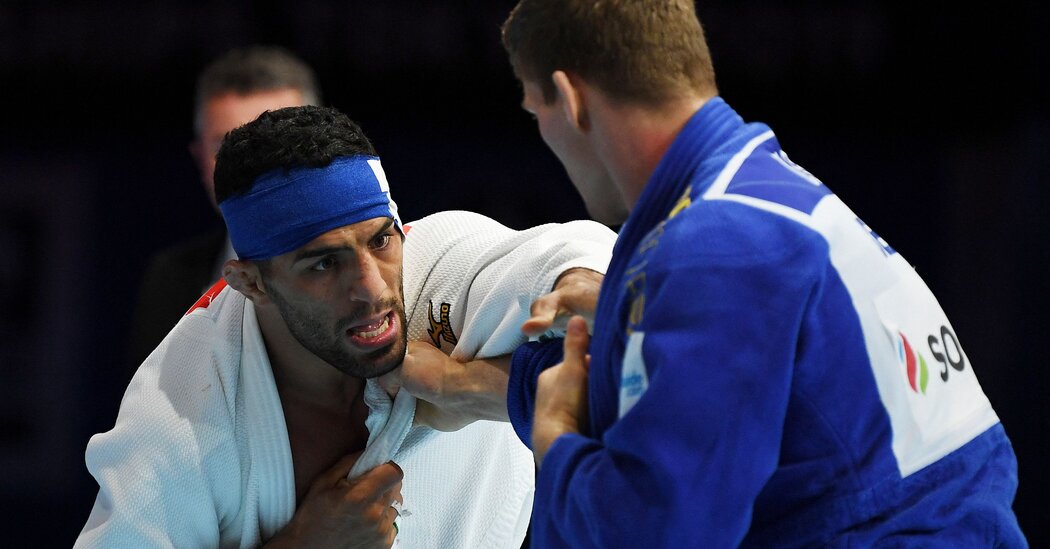 Iran’s blanket suspension from world judo events for ordering one of its athletes to pull out of an event to avoid competing against an Israeli was overturned by the Court of Arbitration for Sport on Monday.

The court did not disagree that Iran had committed “severe violations” of International Judo Federation rules in the case, and it said the country deserved sanctions. But it decided the punishment that was imposed — banishment from all competitions until Iranian officials give “strong guarantees and proves that they will respect the I.J.F. statutes and accept that their athletes fight against Israeli athletes” — went too far.

An unlimited suspension, the court said, “had no legal basis” under the sport’s rules.

Iran’s Islamic government prohibits Iranian athletes from competing against Israeli athletes in any contest or tournament, including the Olympics. Athletes have been banned from sports for life for breaking the rule, and others have withdrawn from events — even at the Olympics — to avoid such confrontations.

On Monday, the CAS panel sent the current case back to the disciplinary committee of world judo’s governing body — effectively asking it to start over only months before Iran and Israel will send judokas to the Tokyo Olympics.

The unlimited ban was imposed in 2019, after the Iranian world champion Saeid Mollaei revealed that he had been instructed by team officials to withdraw or intentionally lose in the semifinals of the world championships in Tokyo to avoid being matched against an Israeli judoka in the final. Mollaei said he refused, even after, he said, an Iranian official approached him as he was warming up for his semifinal to try to intimidate him.

Mollaei wound up losing the match, and an Israeli competitor, Sagi Muki, won the gold medal.

“I am a fighter; I want to compete wherever I can,” Mollaei said at the time. “I live in a country whose law does not permit me to.”

After the tournament, Mollaei said he feared for his safety. He requested and was granted asylum in Germany. He now competes for Mongolia.

At an event in Tel Aviv in February, Mollaei and Muki posed for a photograph together and offered good wishes to one another on social media. Both men are on course to qualify for the Tokyo Games.

Tensions between Israel and its neighbors have sometimes spilled onto the playing fields of sport, and judo has been a hot spot in recent years. At the 2016 Olympics, an Egyptian judoka refused to shake hands with his Israeli opponent after their match.

For decades, Iranian athletes have at times gone to great lengths to avoid meeting Israeli opponents. In 2017, an Iranian wrestler was cruising to victory against a Russian opponent in a major competition when his coach, aware an Israeli awaited in the final, suddenly instructed him to throw the match. Within moments, the Iranian, Alireza Karimi-Machiani, was flopping on the mat as the Russian piled up points.

And in 2004, an Iranian gold medal favorite, Arash Miresmaeili, turned up several pounds overweight at the weigh-in for his match against an Israeli at the Athens Games. The violation offered Miresmaeili the cover of disqualification, rather than a refusal to compete. He is now the president of Iran’s judo federation.

Mollaei’s defection was not the first time an Iranian champion has rebuked the country. Last year, the only female athlete to win an Olympic medal for Iran announced that she had defected because of “hypocrisy, lies, injustice and flattery.” The athlete, Kimia Alizadeh, 22, announced her decision in an Instagram post accompanied by a photo from the 2016 Summer Games in Rio de Janeiro, where she won a bronze medal in taekwondo.

“My troubled spirit does not fit into your dirty economic channels and tight political lobbies,” she wrote at the time. “I have no other wish except for taekwondo, security and a happy and healthy life.”

Alizadeh later turned up in the Netherlands, and earlier this year she was granted refugee status in Germany. She is expected to compete in European qualifiers for the Tokyo Olympics.

“This decision is even harder than winning the Olympic gold,” Alizadeh wrote of her defection last year, “but I remain the daughter of Iran wherever I am.”