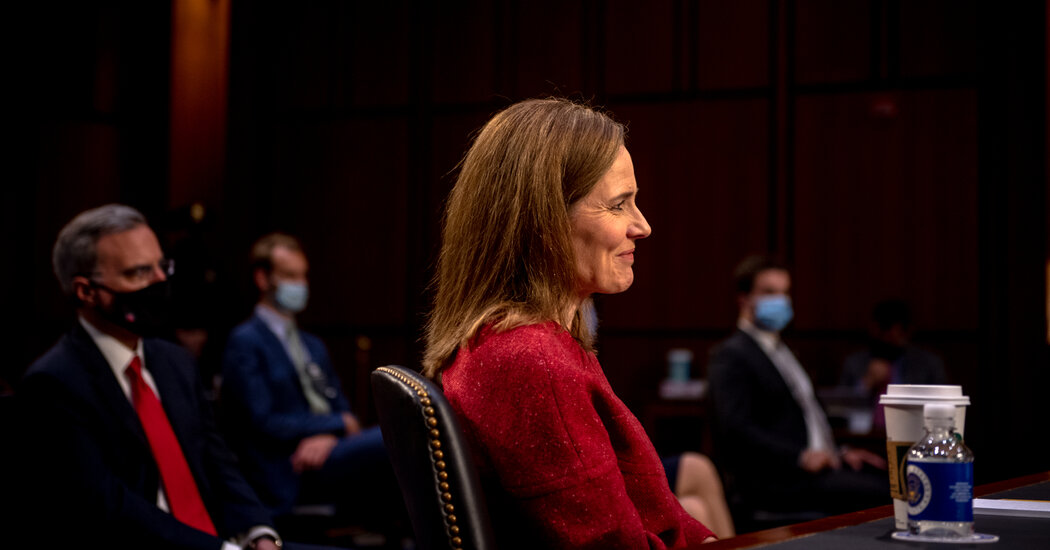 During the first round of questioning in her Supreme Court confirmation hearing, Judge Amy Coney Barrett faced a wide variety of meaningful inquiries about her background in a predominantly civil marathon on Tuesday.

Both Republican and Democratic members of the Senate Judiciary Committee posed a range of substantive questions about Judge Barrett’s legal views and rulings in past cases, largely avoiding any forays into discussion of her character or personal life.

“Just one observation: really a lot of good questions, good interchange,” Senator Lindsey Graham, Republican of South Carolina and the committee’s chairman, said on Tuesday. “I hope the American people understand that this is the way that it should be.”

But with many of the more technical questions asked, committee members will now begin shorter, 20-minute rounds in which they may look to more forcefully make their case for or against Judge Barrett’s confirmation.

Here are some of the ways the conversation could shift on Wednesday:

How much more will Judge Barrett be invited to speak?

However, several senators, including Sheldon Whitehouse, Democrat of Rhode Island, and Ted Cruz, Republican of Texas, barely stopped to question Judge Barrett at all. They instead spent the bulk of their time expounding on larger questions about the ideological balance of the Supreme Court and the influence of special interest groups on the nomination process. And Mr. Graham, who is just weeks away from a tough re-election fight, used a significant portion of his time to deliver something close to a campaign speech.

After nearly 12 hours, and with many of the anticipated questions surrounding Judge Barrett’s relatively short record as a judge now asked and answered, more senators may pivot away from directing questions to the nominee on Wednesday.

Many Democrats have already voiced their opposition to holding the hearing at all, arguing that the proximity to the election makes it inappropriate, and that the Senate has more pressing priorities given the chaos caused by the coronavirus pandemic.

Heading into later rounds of questioning this week, both parties may use their time to discuss topics like health care and coronavirus relief that they see as central to their messaging ahead of the election. If they do, Judge Barrett may be afforded much less time to speak.

What else can be said about independence?

One of the recurring questions Judge Barrett fielded on Tuesday concerned her judicial independence and whether she would recuse herself in any election law cases related to the man who nominated her: President Trump.

Throughout the day, Judge Barrett emphasized that she had made no promises to Mr. Trump or anyone else about how she might rule in the future, even though the president has repeatedly spoken about his intent to add sympathetic voices to the court.

While several Democrats pushed Judge Barrett to commit to recusing herself in cases that concern the president, she repeatedly demurred, insisting only that she would consider any relevant factors that might cast doubt on her impartiality when making that decision.

Like many past nominees, Judge Barrett declined to speculate on how she might rule in hypothetical cases that may arise after her confirmation, including those involving the election. She used the same reasoning to rebuff questions about how she might rule on cases concerning the Affordable Care Act or abortion rights.

Given that any further questions about Judge Barrett’s participation in a hypothetical election case are likely to go unanswered, Democrats may be forced to take a different tack.

On Tuesday, Senator Cory Booker, Democrat of New Jersey, framed a few questions in more concrete terms, such as asking Judge Barrett whether she believed the president should commit to a peaceful transition of power, something he has repeatedly declined to do. While Judge Barrett may argue that she is not in a position to weigh in on the president’s behavior or public statements, Democrats may look to push her to discuss actions Mr. Trump has taken that they see as falling outside of the law, or threatening constitutional norms.