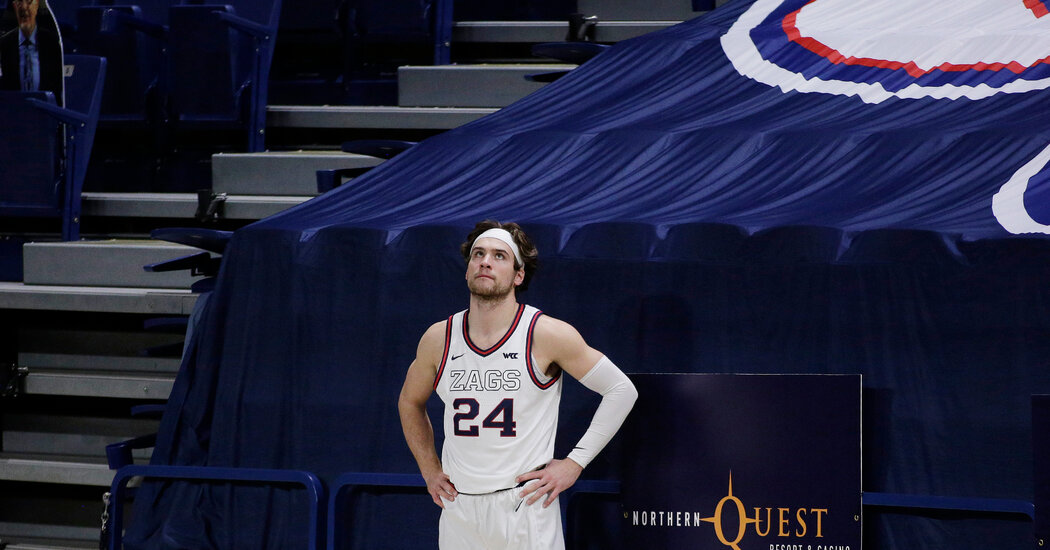 In normal times, even fans who don’t follow college basketball would be feeling nervous anticipation while the No. 1-ranked Gonzaga Bulldogs chase history. Few teams in recent memory have been as dominant or as fun to watch, and if this mid-major program can keep winning and finish March Madness with a national title, it will deserve to be mentioned among college hoops’ greats.

But these, of course, are not normal times.

The perpetual N.C.A.A. tournament Cinderella played the final game of an undefeated regular season on Saturday night in an arena that was essentially devoid of fans. The Bulldogs’ on-campus arena — affectionately known as the Kennel — had none of the trademark energy, the surging craziness that the small Jesuit school in eastern Washington State had curried by perpetually challenging the game’s blue bloods. Finally arriving as a top dog, Gonzaga’s kennel had no bark.

The Zags became the rare team to hold the No. 1 ranking from the regular season’s start until its finish. At 24-0, the team enters the postseason aiming to be the first Division I men’s team since Indiana in 1976 to win a national title without a loss.

But watching that win over Loyola Marymount unfold, my mind seemed eager to make up for the wall of noise that would normally accompany such a game. Every sound, every cry of the referee’s whistle, every rhythmic thump of the ball felt amplified.

When Jalen Suggs raced down court and dunked, the air merely rippled with assorted claps and shouts from the few dozen on hand — mostly players’ family members.

This was senior night, the last home game for one of the nation’s best four-year players, the sharpshooting small forward, Corey Kispert. In normal times, Kispert would receive an appropriately adoring send-off. He’d walk through a mob of students to the court, bathe in an ovation, greet his family on the court and cut down one of the nets.

None of that happened Saturday. With restricted capacity, the school decided to keep the evening decidedly understated. “There’s nobody here,” Gonzaga Coach Mark Few said after the game. “Literally, nobody here. I don’t know who we’d be doing it for.”

That’s the world we live in now. This month marks one year since the coronavirus pandemic slammed into the United States, disrupting all aspects of daily life including sports. Our games and leagues have returned, but with few or even no fans in the stands, they’ve often felt like knockoffs of the real thing.

Has any sport been as affected as college basketball, which draws so much of its allure from being played in intimate arenas in front of rabid fans? The college game limped through a jolting, painful season, despite having more than 1,500 contests postponed or canceled because of the pandemic. Amid all of this, you’d not be alone if you haven’t paid much mind. Or if you’d missed what’s going on in Spokane, Wash.

“People are paying attention to so many other things right now,” said Adam Morrison, one of Gonzaga’s best known players and an N.B.A. first-round draft pick who now works as a radio analyst for the team. “It just feels kind of melancholy,” he said of a season unfolding amid the pandemic.

Morrison’s heady final season enthralled the sports world, landing him magazine covers as an All-American his junior year, during which he shared the Oscar Robertson Trophy for player of the year with Duke’s JJ Redick. Morrison’s 2005-06 Gonzaga team lodged one of the outsider program’s best shots at a title before flaming out in the Sweet Sixteen in an epic collapse against powerhouse U.C.L.A.

This year’s Zags have none of the markings of a long shot. Gonzaga’s undefeated campaign included wins over Iowa, Kansas, Virginia and West Virginia — ranked teams from ballyhooed conferences. The team’s streak of 21 straight double-digit victories while ranked No. 1 topped the mark held by the 1971-72 U.C.L.A. Bruins of John Wooden and Bill Walton, a squad that went 30-0 on the way to winning a national championship.

March Madness should be a victory lap for Gonzaga, but in a year that seems only meant to bolster the N.C.A.A.’s financial bottom line, the postseason will go on without the celebratory spirit of the past. The men will play their championship tournament in Indianapolis, the women in San Antonio. Fan attendance at both tournaments will be limited.

If this is when Gonzaga finally wins its first title, would the team’s win feel historic in a year when college basketball has been played as if on mute?

All of this makes me think of last year’s Oregon Ducks women’s basketball squad. The team with Sabrina Ionescu, the most recognizable name in college basketball, male or female, that season.

I spent a few weeks following the Ducks for a feature on Ionescu, time seemingly spent in another universe, back when the coronavirus seemed like a distant bit of trouble that would soon be tamed. Ionescu had become a college sports rock star. She wasn’t just well known because of her eye-popping play. The bond she’d had with Kobe Bryant and his daughter, Gianna, before they died added a tragic gloss to her fame.

When Ionescu played her last regular-season game on March 1, 2020, close to 13,000 fans at Matthew Knight Arena bathed her and the No. 2-ranked Ducks in appreciation. Strobe lights flashed, hip-hop music blared, and eager fans were on their feet in full ovation mode for long chunks of a 36-point win over rival Washington.

The N.C.A.A. shut down spring sports 11 days later. Ionescu and the Ducks didn’t get a chance at a national title, but Gonzaga almost surely will have its opportunity albeit in a completely different environment. Ionescu said it should still be a moment to savor.

“If I could talk to the Gonzaga players, I would tell them, ‘don’t take it for granted,’” she said when we spoke this week. “I know it’s not what everybody expected, a year later, to still be in this mess. Not being able to play in front of normal crowds. But being able to play is better than not being able to compete. And besides, with all of the trials and tribulations of this year, winning it all might be more rewarding in the long run.”