Did This Building Grow a Beard? Nope. Those Are Legs. 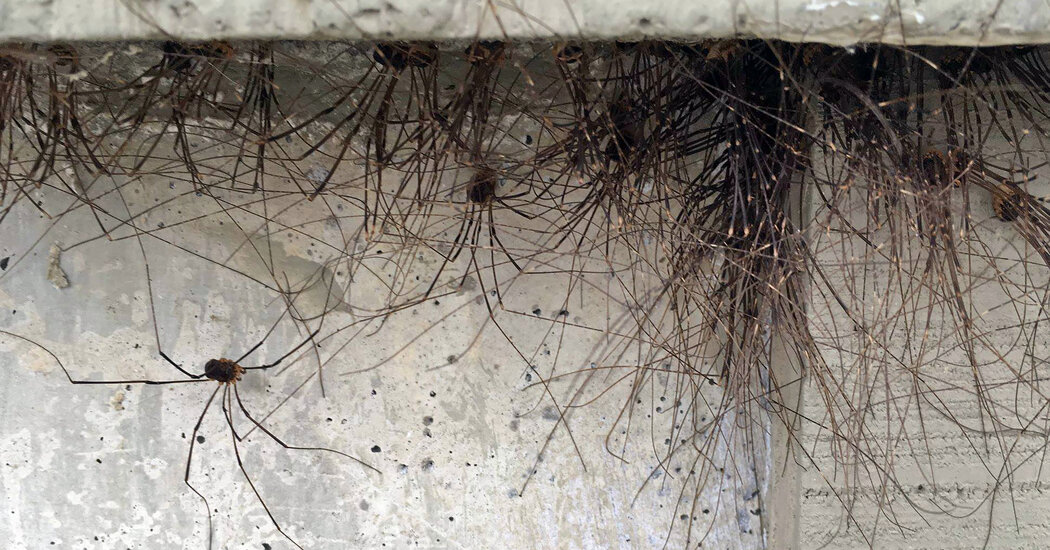 Shortly before Halloween in 2018, an administrative building at Glacier Bay National Park & Preserve in Alaska began to sprout a beard.

But the strands that composed the furry fringe weren’t fine brown hairs. They were the spindly legs of hundreds of tightly clustered daddy longlegs, letting their glorious gams dangle free.

Park officials snapped photos of the spookily well-timed growth and posted them to Facebook and Twitter, and shared them again this sinister season, terrifying onlookers anew.

The ability of Opiliones species, also known as harvestmen, to form these woolly knots has fascinated arachnid enthusiasts for years. But “we still don’t really know what triggers these aggregations,” said Mercedes Burns, an evolutionary biologist who studies the eight-legged creatures at the University of Maryland, Baltimore County.

One leading hypothesis posits that Opiliones get together to keep from drying out when humidity levels drop in the summer or fall, Dr. Burns said. As their nickname implies, most daddy longlegs are built like grains of rice buoyed by super-skinny stilts, saddling them with “a big surface-area-to-volume ratio problem,” she said.

With few spots to store water and plenty of places from which to lose it, the arachnids rapidly parch. Hunkering down together creates a microclimate for the arachnids, not unlike a sweaty locker room, that can stall the desiccation process.

Another possibility is that the scrums provide some protection against predators like birds, lizards and insects. Unlike most of their spider cousins, daddy longlegs (which are not spiders) don’t produce venom, leaving them somewhat defenseless when caught solo. Bunched together, they might be able to more efficiently alert each other to danger.

The arachnids also secrete a potent — and sometimes noxious — substance that’s thought to ward off hungry hunters and might be more powerful when produced by many harvestmen.

Kasey Fowler-Finn, an arachnid expert at Saint Louis University, recognizes the smell, but isn’t particularly perturbed by it. “It’s like sweet but bitter chocolate, maybe a bit buttery,” she said. “I tried to train my dog on it.”

If the harvestmen are forced to scatter, there might be strength in numbers, if only by the sheer discombobulating power of a thousand legs dashing off in different directions. “They do this body-bobbing behavior that tends to freak people out,” Dr. Fowler-Finn said. “It’s hypothesized to be a distraction mechanism.”

Tight-knit jumbles could also come in handy when it comes time for certain leggy lotharios to mate.

“Really, this is all conjecture,” Dr. Fowler-Finn said. “We don’t have a good answer for it.”

The congregations also come in many different forms. They can range in number from dozens to hundreds of creepy crawlers. Some might bring together multiple Opiliones species. Others will repeatedly dissolve and reform over time.

And when researchers come across the communes, they can benefit, too.

“I’ve collected them by literally scooping up hundreds of individuals,” Dr. Fowler-Finn said. “And they just drip from your hand.”

The aggregations might look dense, but really, it’s all legs — writhing appendages that are dry and brittle and can be shed by some species at will.

Dr. Burns loves her arachnids. But in all honesty, she said, “It feels pretty gross.”