DeGrom Shuts Out the Nationals and Sets a Strikeout Record 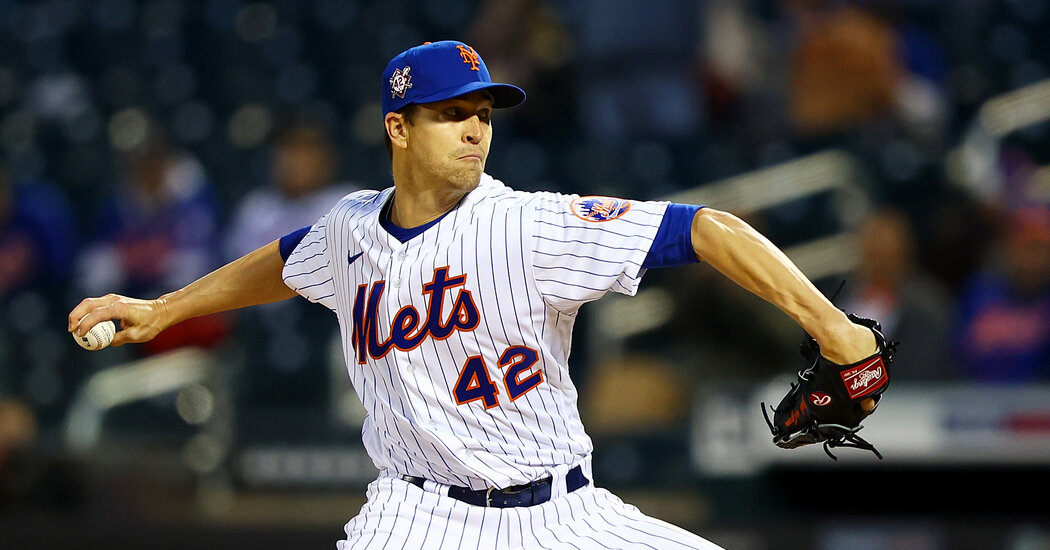 Jacob deGrom struck out a career-high 15, pitched a two-hitter and boosted the sagging Mets’ offense with a go-ahead double from the No. 8 spot in the batting order, powering his team over the Washington Nationals, 6-0, Friday night.

DeGrom has struck out 43 in his last three starts and 50 overall this season, breaking the major league record for most in a pitcher’s first four starts set just last weekend by Cleveland ace Shane Bieber with 48.

The two-time Cy Young Award winner retired the final 19 batters of his second shutout and fourth complete game in 187 starts, walking none. DeGrom also made the final putout, leaping on first base to catch Pete Alonso’s toss on Josh Harrison’s grounder.

Brandon Nimmo hit his first home run of the season, an eighth-inning drive off Kyle McGowin, and had four R.B.I. The Mets stopped a three-game slide after getting to Citi Field at 4:15 a.m. after a Thursday night game at Chicago’s Wrigley Field.

DeGrom (2-1) was coming off consecutive 14-strikeout games against Miami and Colorado, and the Mets gave him a fifth day of rest. He reached double-digit strikeouts for the third time this season and 49th overall. He joined Boston’s Pedro Martinez in 1999 and Houston’s Gerrit Cole in 2019 as the only pitchers to strike out 14 in three straight appearances.

Taking the mound to Lynyrd Skynyrd’s “Simple Man,” deGrom was anything but: He reached 100 miles per hour on 10 of 109 pitches — including five in the first inning. Since the start of the 2020 season, deGrom has reached triple figures on 33 first-inning pitches; Miami’s Sixto Sanchez is a distant second with eight, according to MLB Statcast.

DeGrom struck out the side in the sixth and seventh innings and dropped his season E.R.A. to 0.31 with one earned run allowed this season. The pandemic-limited crowd of 8,130 repeatedly chanted “M-V-P!”

It was the 16th time since 1901 that a pitcher had 15 or more strikeouts and no walks in a shutout.

DeGrom’s opposite-field double in the fifth against Erick Fedde (1-2) put the Mets ahead by 1-0 and gave him a five-game hitting streak dating to 2019.

Giancarlo Stanton busted out of his slump with two rocketed home runs — one with the highest exit velocity this season — and the Yankees connected four times, sending the team to a 5-3 win over Cleveland on Friday night.

Stanton hit a 429-foot solo shot in the third inning off Logan Allen (1-3) and another in the fifth for his first multi-homer game since Sept. 27, 2018. The Yankees have won two straight and three of four after a horrendous start. The team overcame a 3-0 first-inning deficit for the second game in a row.

Yankees starter Jordan Montgomery settled in after a 37-pitch first inning, but was lifted in the fifth, one out shy of qualifying for the win.

Lucas Luetge (1-0) came on and got four outs and was credited with his first win in the majors since 2013 with Seattle. The right-hander kicked around in the minors the past few seasons before signing with the Yankees in March.

Darren O’Day and Chad Green pitched an inning apiece before closer Aroldis Chapman worked the ninth for his fourth save.

Like many of his teammates, Stanton came staggering into the series with a .158 batting average and in a 3-for-34 slump. Manager Aaron Boone gave him Thursday off, and the rest seemed to help one of baseball’s most feared sluggers — when he’s locked in.

After the Yankees rallied to tie it 3-3 with a three-run second on the homers by Hicks and Odor, Stanton put them ahead for good in the third with his laser into the left-field bleachers, a 118 mph screamer.

Earlier this season, Stanton hit a single that registered 120 mph, the hardest-hit ball of 2021.

In the fifth off reliever Trevor Stephan, Stanton made it 5-3 with a 418-foot shot that crashed safely into a protective net in the center-field bullpen.

Tom Wilson Is Hockey’s Chief Villain. Or Is He?