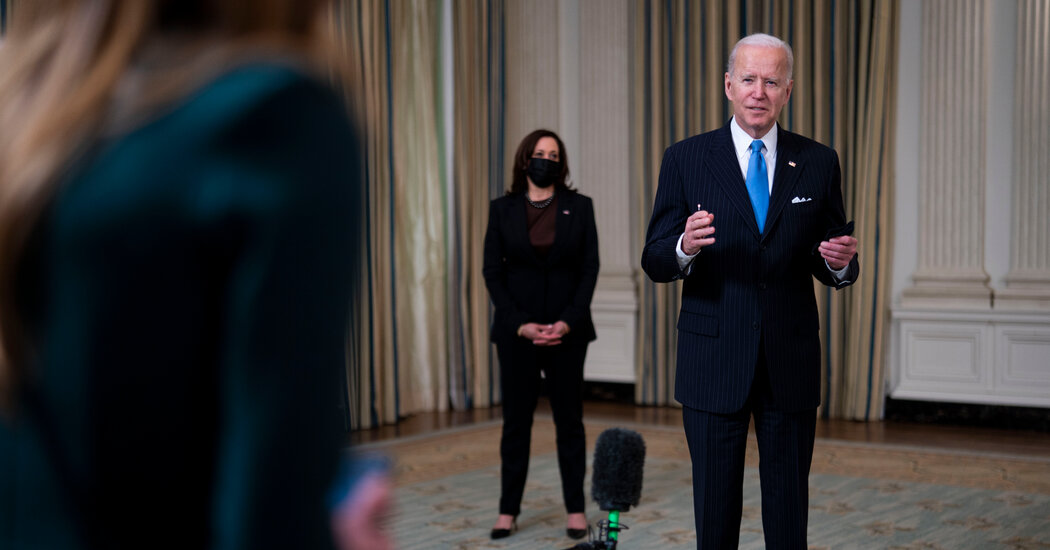 Whatever honeymoon period he may have briefly enjoyed, President Biden is now past it, according to the results of a Monmouth University poll released this week.

Mr. Biden’s approval rating now stands at 51 percent nationwide, with 42 percent of the country disapproving, according to the poll, which was released on Wednesday. That’s a much narrower split than his 54 percent approval and 30 percent disapproval in another Monmouth survey that was conducted just after he took office.

His handling of the coronavirus appears to earn higher marks: Sixty-two percent of respondents to a nationwide Kaiser Family Foundation poll, also released Wednesday, said that they approved of how the president was confronting the Covid-19 crisis; just 30 percent disapproved.

More than nine in 10 Democrats said they liked how Mr. Biden was handling the pandemic, but just 22 percent of Republicans agreed, the Kaiser poll found. Notably, independents gave him positive marks on the issue by a two-to-one margin.

Congress is bearing the brunt of Americans’ impatience. The country now disapproves of the job lawmakers in Washington are doing by a 29-percentage-point spread, compared with just 16 points in January, the Monmouth poll found.

The poll found widespread support for the Covid-19 relief bill making its way through Congress, with 62 percent saying they want to see it passed. Two-thirds supported the bill’s provision increasing additional unemployment benefits to $400 a week from $300 a week. And 68 percent said that the proposed $1,400 stimulus payments should remain in the legislation as is, despite Republican objections; just 25 percent said the payments should be reduced to garner bipartisan support.

Fifty-three percent of respondents supported raising the minimum wage to $15 an hour, while 45 percent were opposed. Democratic leaders have pushed for such a wage increase, but the measure is unlikely to make it through the Senate.

The share of voters expressing no opinion of Mr. Biden’s performance dropped to 8 percent from 16 percent, with those Americans mostly appearing to drift into the “disapprove” camp.