Biden and Surrogates Hit Trump on Taxes in Closing Argument 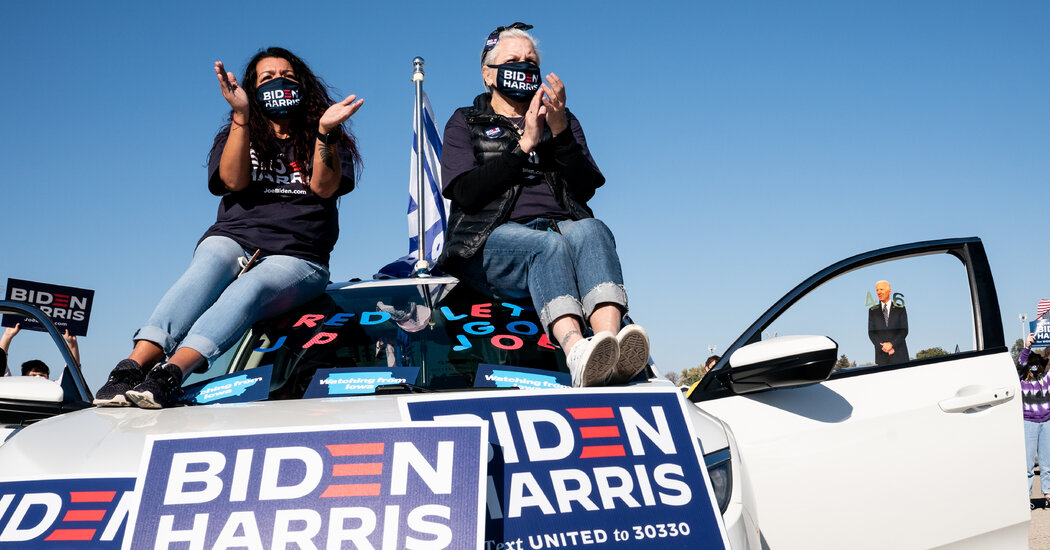 As former Vice President Joseph R. Biden Jr. and his surrogates make their closing arguments in battleground states stressed by economic hardship amid the pandemic, they often focus on one number: $750.

That’s the amount President Trump paid in federal income taxes in 2016 and again in 2017, a recent New York Times investigation found. And as Mr. Biden accuses Mr. Trump of not doing enough to help working families, he and his allies have held up the president’s income tax bill as a potent symbol of the inequities they seek to remedy in the American tax system.

“Why should a firefighter, an educator, a nurse, a cop, pay at a higher tax rate, which you do, than a major multibillion-dollar corporation?” Mr. Biden asked in Iowa on Friday. “Why should you pay more taxes than Donald Trump, who paid $750?”

Mr. Biden’s running mate, Senator Kamala Harris, weighed in during her debate in early October: “When I first heard about it, I literally said, you mean $750,000?” Biden supporters like Senator Bernie Sanders have also raised the issue, while Priorities USA Action, the largest Democratic super PAC, has run Facebook ads in English and Spanish highlighting the figure.

Few, however, have dug into the topic with as much relish as former President Barack Obama, who has been stumping for his former vice president in recent days. “Listen, my first job was at a Baskin-Robbins when I was 15 years old,” Mr. Obama said during a speech in Philadelphia. “I think I might have paid more taxes that year.”

The Times’s investigation — based on tax information that Mr. Trump has fought to keep hidden in defiance of presidential tradition — found that he had paid virtually no federal income taxes for most of the last two decades, largely because he lost far more money than he made. In addition, he is facing a decade-long audit of a $72.9 million tax refund; an adverse ruling could cost him more than $100 million.

Since the investigation was published in late September, Mr. Trump has claimed that the $750 he paid in 2016 and again in 2017 was actually a filing fee, though there is no fee to file federal income taxes. He has also said he prepaid millions of dollars in federal income taxes, but any prepayments would be estimated taxes factored into his final bill.

Mr. Trump reiterated his argument in a tweet on Saturday morning: “I paid many millions of dollars in Taxes to the Federal Government, most of which was even paid early, or PREPAID. MANY $MILLIONS. The Failing @nytimes never likes reporting that!”

In a statement on Friday evening, a spokeswoman for the Trump campaign, Courtney Parella, said, “Joe Biden is attacking the president on inaccurate claims from illegally leaked documents, but we’d expect nothing less from a failed career politician with no real policy accomplishments and a platform being dictated to him by the far-left radicals of his party.”

Mr. Trump has repeatedly said he will release his taxes after the I.R.S. audit is complete, though there is nothing preventing him from releasing them now.

In the last days of the campaign, the candidates are scrapping for the few remaining undecided voters at a time when the economy is still digging itself out of the hole caused by the pandemic.

Mr. Biden has assailed Mr. Trump for policies that have largely benefited the wealthy. In the 2017 Republican tax package, one of Mr. Trump’s signature achievements, the top fifth of earners received more than 60 percent of the total tax savings, according to the Tax Policy Center.

Mr. Biden is proposing to refocus on middle-class relief and increase taxes on corporations and those with incomes above $400,000.

“Why should you pay more taxes than Donald Trump pays?” Mr. Biden asked in Florida on Thursday. “And that’s a fact. $750? Remember what he said when that was raised a while ago? How he said: ‘Because I’m smart. I know how to game the system.’ He games the system at your expense.”

He continued along the same lines the next day in Iowa: “They ain’t going to be gaming the system anymore in a Biden administration,” he said. “They’re going to start paying. And we’re going to deliver tax relief for working families, the middle class.”

During their first debate in September, Mr. Trump said that he had paid “millions of dollars” in federal income taxes in 2016 and 2017, even though his tax returns show he had not.

At the same time, he also justified why his bills were so small compared with those of average Americans. “It was the tax laws,” he said. “I don’t want to pay tax.”

“Before I came here, I was a private developer,” he said, adding, “Like every other private person, unless they’re stupid, they go through the laws, and that’s what it is.”

Indeed, over the years, Mr. Trump has taken advantage of tax breaks that disproportionately benefit the real estate industry.

Mr. Trump has also accused Mr. Biden of failing to advance his agenda during his nearly half-century as a public servant. But during the Obama presidency, Republicans repeatedly thwarted attempts to tilt the tax system away from higher earners. In 2010, Mr. Obama had wanted to end Bush-era tax cuts for couples with incomes of more than $250,000, but Republicans balked, and he gave in to their demands as part of a compromise.

The next year, another plan by Mr. Obama to increase taxes on the wealthy was derided as “class warfare” by Paul Ryan, the chairman of the House Budget Committee. And the year after that, Senate Republicans blocked Mr. Obama’s proposal that the superrich pay at least 30 percent, a plan that Mitch McConnell, the Senate majority leader, dismissed as a “political gimmick.” Republicans have gone on to drop their rhetoric about fiscal discipline as the national debt has soared under Mr. Trump.

“Listen, the only people truly better off than they were four years ago are the billionaires who got Trump’s tax cuts,” Mr. Obama said in Orlando. He and other surrogates have also highlighted a Times report about more than $188,000 in taxes that Mr. Trump paid from 2013 to 2015 out of a previously undisclosed Chinese bank account maintained by the Trump Organization.

“Can you imagine if I had had a secret Chinese bank account when I was running for re-election?” Mr. Obama asked in Philadelphia. “You think Fox News might have been a little concerned about that? They would’ve called me Beijing Barry!”