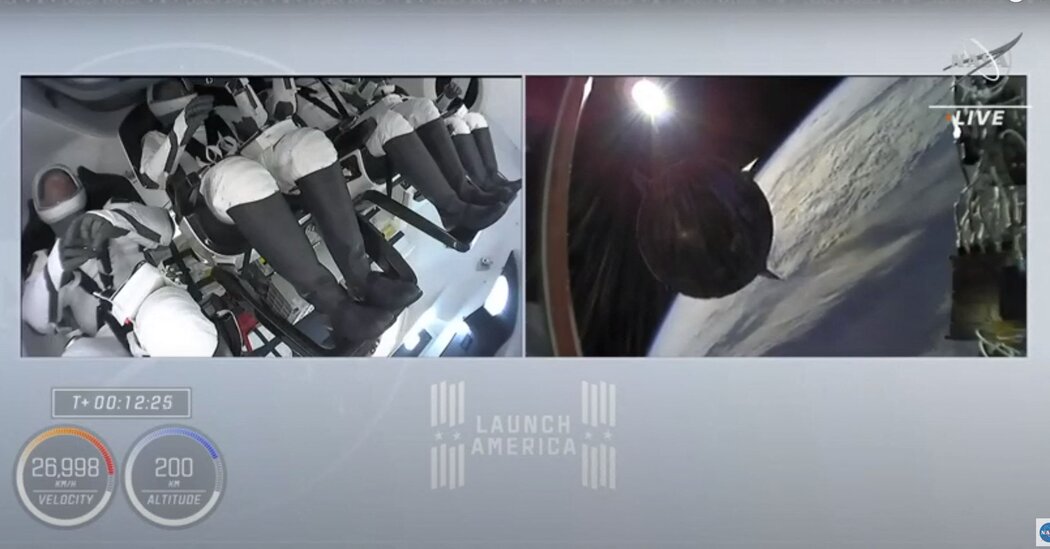 As the astronauts were getting ready for sleep, there were a few minutes of concern: Mission controllers at SpaceX headquarters in California warned the crew that a piece of space debris was going to whiz past the capsule at about 1:43 p.m. Eastern time.

The astronauts were told to put on their spacesuits, get back in their seats and lower their protective visors.

With the growing number of rocket launches and satellites — especially with the proliferation of constellations in orbit like SpaceX’s Starlink system — low-Earth orbit is becoming increasingly cluttered with debris like pieces of rockets and dead satellites, and experts on Earth have repeatedly voiced their worry about the risk of collisions. The European Space Agency hosted a major conference on the subject this past week.

The space station, which is about the size of a football field, periodically has to adjust its orbit to avoid a piece of space debris. It is more unusual to find debris on a near collision course with something the size of the Crew Dragon — 27 feet tall, 13 feet wide.

For the space station-bound crew, the object appeared likely to miss the Crew Dragon, and no emergency maneuvers were performed to get out of the way. But because of the uncertainty in the exact location and trajectory of the debris, the spacesuits offered an extra level of protection if the debris did collide with the spacecraft.

The debris was not immediately identified, and the time of closest approach came and went uneventfully. The crew members then returned to doing what they had been doing — getting ready to sleep.