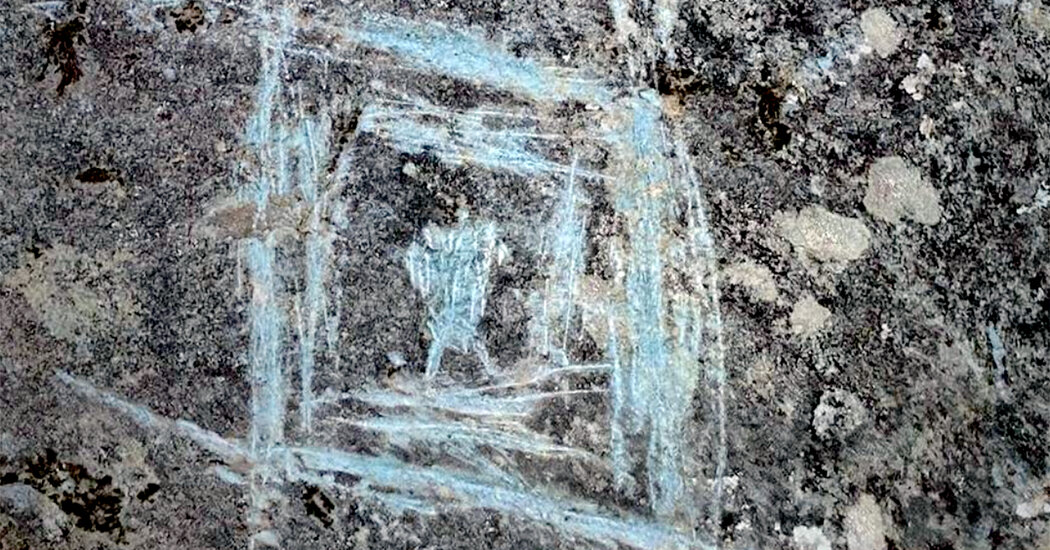 An ancient site of carved boulders and rock formations in a Georgia forest that has long been sacred to Native Americans has been vandalized with paint and deep scratches, the United States Forest Service said.

The boulders are part of the Track Rock Gap site in the Chattahoochee-Oconee National Forests, a protected area of more than 800,000 acres where more than 100 figure carvings known as petroglyphs were made on soapstone boulders by Native Americans in precolonial times, the service said.

Five boulders had scratches and two had paint on them, said Steven Bekkerus, a spokesman for the Forest Service.

“It’s one of the most significant rock art sites in the Southeastern United States and the only such site located on public land in Georgia,” the service said on Facebook on Monday.

Mr. Bekkerus said in an interview on Wednesday that the service’s law enforcement unit was investigating the vandalism with the help of its tribal partners. He said the Facebook post about the vandalism had been removed because of the investigation.

“This is their site that we manage,” he said, referring to the Muscogee Creek and Cherokee people. The vandalism, which was reported by The Charlotte Observer, is believed to have taken place in 2020, but the exact timing and how it was discovered were not immediately clear, Mr. Bekkerus said. Nearby campgrounds had recently opened after being closed for the winter, he said.

Damage to historic sites can be investigated under federal laws including the Archaeological Resources Protection Act of 1979, which aims to protect archaeological resources on public and Native American lands.

Mr. Bekkerus said that the boulders were surrounded by fencing to make them accessible for people to learn about their history, and that the area was clearly marked as a site of significance.

Archaeological excavations showed that ancestors of the Muscogee Creek and Cherokee used the site, possibly for more than 1,000 years, telling stories through the rock etchings, the Forest Service said in 2012 when it announced the results of research that ruled out a possible Mayan settlement at the site.

James Wettstaed, a Forest Service archaeologist, provided details about the site at the time, saying that its rock piles and features similar to rock walls dated to at least 800 A.D., and possibly earlier.

The Cherokee Tribal Heritage Preservation Office said in a statement that the Eastern Band of Cherokee people were “sad and frustrated” to learn of the vandalism.

“They are special sites for the Eastern Band of Cherokee Indians and for all people as part of the Heritage of this region,” the statement said. “Whether through ignorance or malice — the result is irreparable damage to a unique site that connects us directly to the people of the past.”

Petroglyphs are also found in other states. Richard Sneed, the principal chief of the Eastern Band of Cherokee Indians, said on Wednesday that large rock petroglyphs have previously been vandalized, including one in Cullowhee, N.C., in 2016 that was later covered with an acrylic panel to protect it.

Some petroglyphs are believed to communicate a tribal story. Another, in Macon County, Ga., is believed to have been used in a fertility rite, he said.

“This demonstrates the need for greater education,” he said of the vandalism.

“When you are talking about historic sites and culturally sensitive sites, it really is the most offensive thing,” he said. “It is our history, and to have that defaced and to be treated with such disrespect, it is very sad.”

“There is always a real problem with looters who come in and don’t care anything about the human remains,” he said. Some take arrowheads and pots, he said.

Mr. Spain said the Muscogee Creek Nation extended into parts of what is now eastern Tennessee, northern Alabama, northern Georgia, and parts of the Carolinas before the arrival of Europeans, who encroached on the lands and expelled the tribe in the 1830s to what is now Oklahoma.

“But we still remember our homelands there,” he said.